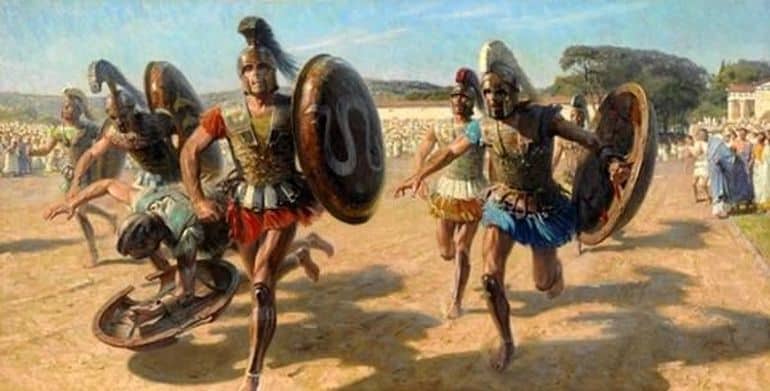 Corinth with all its sinful excesses was also a city that enjoyed athletics. It was the sight of a great stadium where the Isthmian games were held every other year.

In the training for these athletic contests Paul found a strong illustration for the self-discipline required in the Christian life. Many runners participate in a race, but when it is all over, there is only one winner. It may be that the winner’s ability is greater than his competitors. His victory may have been also because he had enough extra self-discipline to have the edge over the others. When the Isthmian athlete went onto the track, he had one thought in mind, winning.

This is what Paul is saying in the Corinthian church: “Run, so you can win.” Our life is like unto a race.

Corinth was noted for anything but self-controlled living, but for the runners in the game, self-control was a necessity. Competitors in the Isthmian games trained for many months. During that time they had to exert strict control over their diet, sleep habits, exercise and all other aspects of daily living. Every waking moment was spent preparing for the day of triumph. The athlete controlled himself in all things. To allow any kind of indulgence could cost him the race.

The amazing thing about the athletes who trained for these games is that all they received, if they won, was a wreath made of leaves. Of course, the winner wore it on his head proudly, but in a few days, it withered.

In contrast, the Christian exercises self-discipline because he is running in a race of which the crown of reward will never deteriorate.

Paul emphasized the necessity of keeping the goal of victory in mind at all times. He compared himself to a runner who knew why he was on the track.

Paul was certain of the reward of his efforts. He had his eye on the finish line and on the prize he would receive when the race was over.

1 Corinthians 9:24-27
24Know ye not that they which run in a race run all, but one receiveth the prize? So run, that ye may obtain. 25And every man that striveth for the mastery is temperate in all things. Now they do it to obtain a corruptible crown; but we an incorruptible. 26I therefore so run, not as uncertainly; so fight I, not as one that beateth the air: 27But I keep under my body, and bring it into subjection: lest that by any means, when I have preached to others, I myself should be a castaway.

The self-discipline which Paul commented about to others, he also practiced himself. Like the runner striving with all his might to reach the finish line, with determination and purpose, Paul aimed to obtain the crown.

Like the boxer, skillfully making every punch connect and count, Paul disciplined his body to be in subjection to godliness.

Paul had such a determination and purpose, that he didn’t want, that after appealing to others to be saved and obtain the crown of life, through some carelessness or neglect, to be disqualified from the Christian race. He was determined that this would not happen because he dealt severely with the carnal impulses which would cause him to fail the Lord.

We see from Israel’s bad example that we cannot depend on great experiences of the past, no matter how wonderful or how spiritual they were.

Israel was overthrown in the wilderness when they failed to discipline themselves, fell into sin and displeased God. Their lust or desire after the evil of inferior things of Egypt led them to despise the manna from Heaven.

Numbers 11:4-6
4And the mixt multitude that was among them fell a lusting: and the children of Israel also wept again, and said, Who shall give us flesh to eat? 5We remember the fish, which we did eat in Egypt freely; the cucumbers, and the melons, and the leeks, and the onions, and the garlick: 6But now our soul is dried away: there is nothing at all, besides this manna, before our eyes.

All the tremendous experiences at the Red Sea and all God’s supernatural provision of manna and water from the rock did not avail when they forgot their consecration, their dedication to God. In fact, their great privileges brought great responsibility. Their greater judgment came when they became careless. The Bible says that we should not be careless of Satan’s devices.

Paul made it clear that God’s people have been amply warned about the consequences of sin. The record of Israel’s spiritual failures are reminders for us to walk in Christ’s way by pointing to the Israelites special relationship to God as His chosen people in a rebellious world.

Paul reminded the Corinthian Christians of their parallel position among the heathen of their day. We see that we are a chosen people when we accept Christ today. We must live in a manner reflecting that spiritual position.

Joseph was led to Egypt, not of his own volition but by providential leading. God used the vindictive hatred of jealous brothers, a passing caravan of traders, an untrained lad torn from his father’s arms. There were the unpromising materials with which God had to work.

All of this was a part of God’s Divine guidance…the chains, the beatings, the imprisonment…all of it was God’s pathway for Joseph.

One writer expressed it like this, ”We may guide our ship by His stars, but we must also trust ourselves.”

To the Jew it is the symbol of their past glories and the hope of their future.

To the Christian it is the city of Jesus’ last ministry, the city where Jesus died and rose from the dead.

Jerusalem, sources of faith and peace, the world’s most sacred city, has also been a city of terror, war and bloodshed.

There have been more wars fought there than in any other city in the world. To walk in and around Jerusalem is to walk over a sea of human blood.

Jerusalem has been besieged more than 50 times, conquered 36 times and destroyed 10 times.