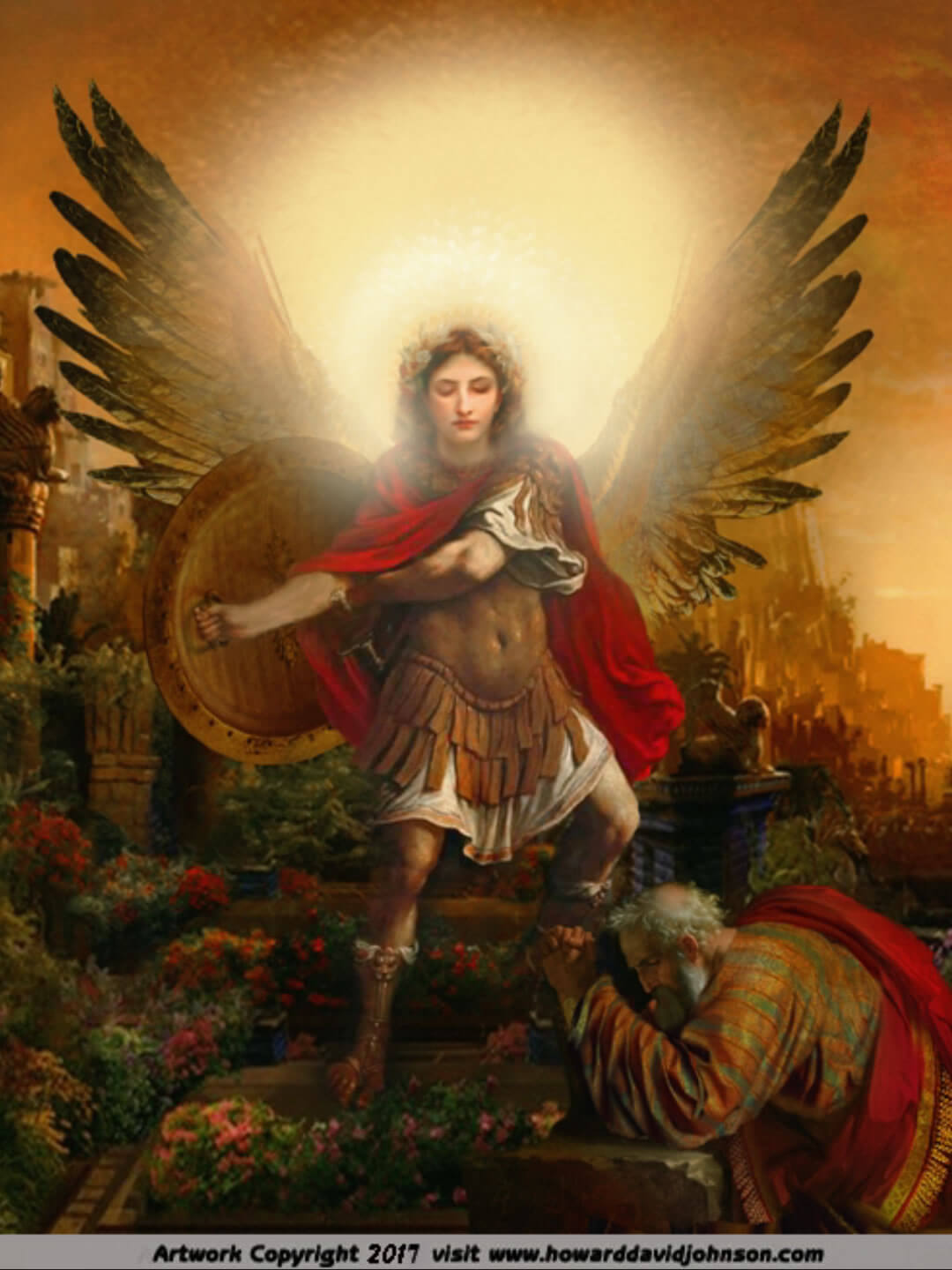 The last three chapters of Daniel should be treated as one vision. The vision relates to the nation of Israel in the future, at this time, and also in the latter days because there is a great deal that is yet prophetic, yet to be fulfilled in the last days.

Daniel fasted for three weeks because he did not get an immediate answer to his prayer.

Here in Scripture we have a new method of revelation. No longer does Daniel see an image or visions of beasts or a vision of weeks. He sees a certain man. He is identified even further by his person and his attire.

1In the third year of Cyrus, king of Persia, a thing was revealed unto Daniel, whose name was called Belteshazzar; and the thing was true, but the time appointed was long; and he understood the thing and had understanding of the vision.

4And in the four and twentieth day of the first month, as I was by the side of the great river, which is Hiddekel; 5I lifted up mine eyes, and looked, and behold a certain man clothed in linen, whose loins were girded with fine gold of Uphaz: 6His body also was like the beryl, and his face as the appearance of lightning, and his eyes as lamps of fire, and his arms and his feet like in colour to polished brass, and his voice of his words like the voice of a multitude. 7And I Daniel alone saw the vision: for the men that were with me saw not the vision; but a great quaking fell upon them, so that they fled to hide themselves. 8Therefore I was left alone and saw this great vision, and there remained no strength in me: for my comeliness was turned in me into corruption and I retained no strength. 9Yet heard I the voice of his words: and when I heard the voice of his words, then was I in a deep sleep on my face, and my face toward the ground. 10And, behold, an hand touched me, which set me upon my knees and upon the palms of my hands. 11And he said to me, O Daniel, a man greatly beloved, understand the words that I speak unto thee, and stand upright: for unto thee am I now sent. And when he had spoken this word unto me, I stood trembling. 12Then said he unto me, Fear not, Daniel: for from the first day that thou didst set thy heart to understand, and to chasten thyself before thy God, thy words were heard, and I am come for thy words. 13But the prince of the kingdom of Persia withstood me one and twenty days: but, lo, Michael, one of the chief princes, came to help me: and I remained there with the kings of Persia. 14Now I am come to make thee understand what shall befall thy people in the latter days: for yet the vision is for many days.

20Then said he, Knowest thou wherefore I come unto thee? And now will I return to fight with the prince of Persia: and when I am gone forth, lo, the prince of Grecia shall come. 21But I will show thee that which is noted in the scripture of truth: and there is none that holdeth with thee in these things, but Michael your prince.

There is a similarity to the vision of Christ after His ascension into glory as it was seen by John in Revelation 1:12-16.

Revelation 1:12-16
12And I turned to see the voice that spake with me. And being turned, I saw seven golden candlesticks; 13And in the midst of the seven candlesticks one like unto the Son of man, clothed with a garment down to the foot, and girt about the paps with a golden girdle. 14His head and his hairs were white like wool, as white as snow; and his eyes were as a flame of fire; 15And his feet like unto fine brass, as if they burned in a furnace; and his voice as the sound of many waters. 16And he had in his right hand seven stars: and out of his mouth went a sharp twoedged sword: and his countenance was as the sun shineth in his strength.

When you read the description of the man Daniel saw, you might conclude that was the incarnate Christ, but study verse 13:

Daniel 10:13
But the prince of the kingdom of Persia withstood me one and twenty days: but, lo, Michael, one of the chief princes came to help me, and I remained there with the kings of Persia.

This angel who came down from Heaven, some people say that was the Son of God; and when I studied those Scriptures I thought it was too, but I believe now that it was an angel, because the Scripture says that one who came down was withstood by the Prince of Persia, one of Satan’s emissaries, and that it took him 21 days to overcome him, and our Lord isn’t like that!

I doubt that our Lord has ever been detained by an emissary of Satan even though He was taken out into the wilderness to be tempted of the devil for 40 days.

Daniel is praying; he has been burdened of heart and there’s great conflict in his heart. He lifts up his heart to God. God answers and He sends down an angel. The interesting thing that is going on now is this. While this conflict is happening in the heart of Daniel, there’s something going on out in space that we don’t find out about until we get to Daniel 10:13.

Daniel wasn’t used to a 21-day wait for an answer from God. The last time we are told he prayed, the Scripture says that before he got the words out of his mouth, God answered him right in the middle of the prayer and now he has been praying for 21 days and nothing is happening.

After 21 days the angel shows up and he explains why he was detained. I don’t know of anywhere in the Bible that you find anything like this!

Satan interrupted the answer to Daniel’s prayer, between heaven and earth. Here’s what happened. Daniel prayed on earth. God heard in Heaven and answered and He dispatched an angel to come and give the answer to Daniel, but in between Heaven and Earth that angel was accosted by an evil angel, and they did warfare in outer space, for 21 days, before God’s angel finally prevailed, and he was allowed to continue his journey to earth.

The key to understanding these last three chapters is found in the explanation the angel gives to Daniel.

Ephesians 6:11-18
11Put on the whole armour of God, that ye may be able to stand against the wiles of the devil. 12For we wrestle not against flesh and blood, but against principalities, against powers, against the rulers of the darkness of this world, against spiritual wickedness in high places. 13Wherefore take unto you the whole armour of God, that ye may be able to withstand in the evil day, and having done all, to stand. 14Stand therefore, having your loins girt about with truth, and having on the breastplate of righteousness: 15And your feet shod with the preparation of the gospel of peace; 16Above all, taking the shield of faith, wherewith ye shall be able to quench all the fiery darts of the wicked. 17And take the helmet of salvation, and the sword of the Spirit, which is the word of God: 18Praying always with all prayer and supplication in the Spirit, and watching thereunto with all perseverance and supplication, for all saints.

There are only two offensive weapons in this list: one is the Word of God and the other is Prayer.

I think the reason the angel was finally able to come down to Daniel was because Daniel never quit praying. The tool that enforces Satan’s defeat is the tool of prayer.

Praying people in the church are so important. We think we solve all the problems by voting and elections, but we do a lot more by what we do on our knees. Praying people really settle the issues that are important.

Satan is so sly and deceitful that he keeps us so busy: reading, organizing all kinds of things, studying the methods of church growth, and we don’t have time to pray as we should and the one thing that’s going to make the difference doesn’t get done, so we’re frustrated, tired and fatigued and we wonder why we don’t have the victory but there isn’t any way that you’re ever going to have victory in a ministry in a life or in a church unless we come to grips with the power that God has put within our hands in prayer. Fervent, serious praying really makes a difference in all of our lives.

God operates in this world through prayer. God doesn’t need our prayers to get His work done, but He is using prayer to teach us what it means to live the life of sovereignty: that one day we will live in the Kingdom. God has defeated Satan, and He has determined that that defeat will be implemented in our lives through prayer. Scripture states that we have not because we ask not. We need to pray against the strategy of Satan, for our homes, our country and our schools. I’m always praying TO… and FOR… but we need to pray AGAINST Satan’s tactics.

Our weapons aren’t carnal. There is a weapon that is available to all of God’s children, and our weapons are spiritual; one of which is prayer. If we are going to survive for the glory of God and for our church, we’ve got to start praying…not surface praying, but like Daniel, with such intensity, like when he was so burdened he couldn’t even eat.

We must be prayer warriors!