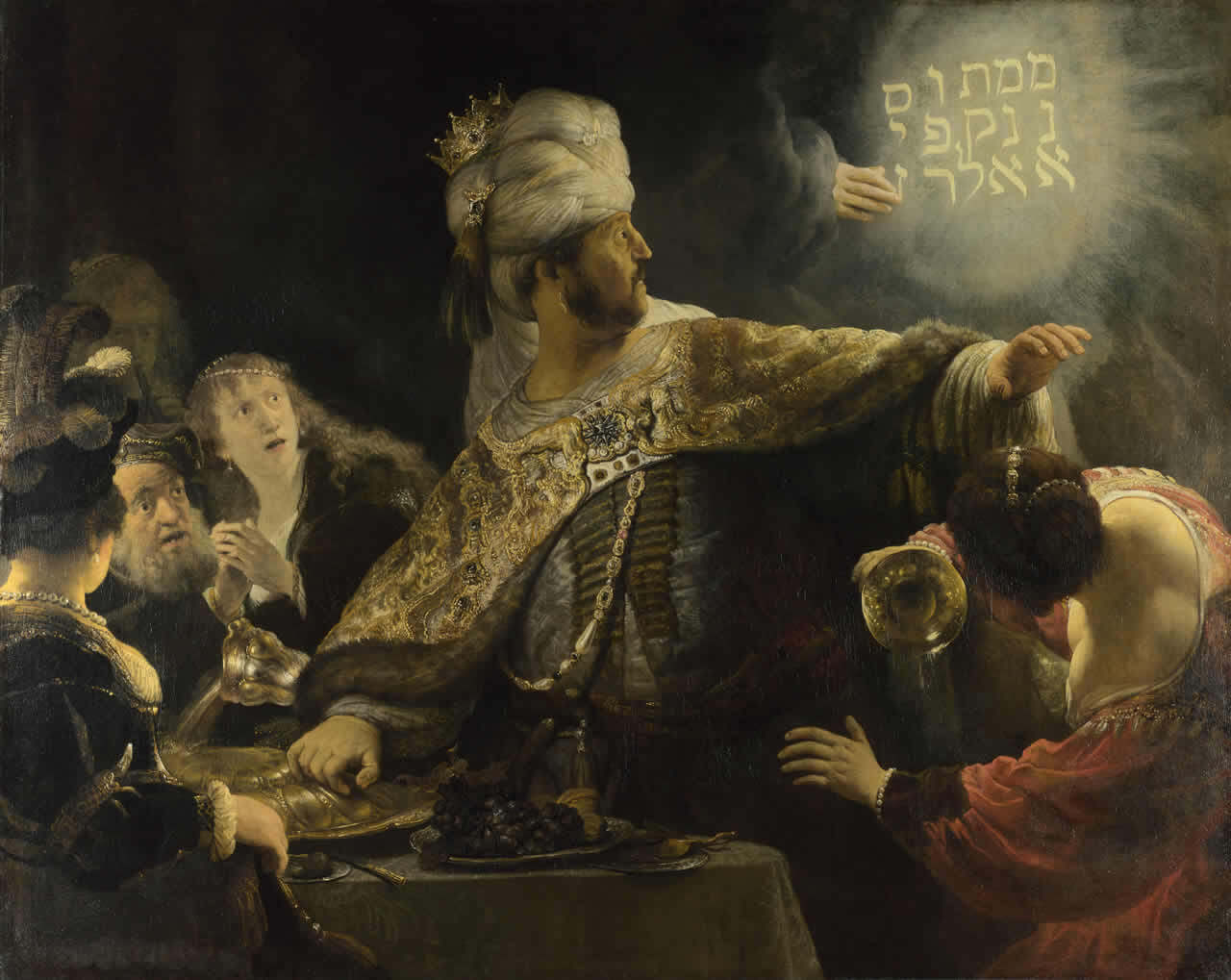 Let me explain something before reading the fifth chapter. God’s Word is so important.

Belshazzar was not really Nebuchadnezzar’s son, but his grandson. In the Hebrew and Chaldean, in which this was written, there was no name for grandfather or grandson, so any ancestor was referred to as a father. Merodach was his father.

Remember the statue? After the head of gold, which was Babylon, the next empire to take over was the Medo-Persians.

Daniel is almost 90 years of age. Nebuchadnezzar has died. He has been succeeded by his son, a man by the name of Evil-Merodach. Evil-Merodach reigned for only a couple of years and was assassinated by his brother; another was killed in battle and another was captured by the Medes and the Persians and lived the life of a prisoner of war.

Onto the scene comes Belshazzar, a fellow who was addicted to wine, women and song and this is where we will read about “the HANDwriting on the wall.” He was Nebuchadnezzar’s grandson.

King Belshazzar gave a great banquet for a thousand of his nobles and drank wine with them. While Belshazzar was drinking his wine, he gave orders to bring in the gold and silver goblets that Nebuchadnezzar, his father (grandfather) had taken from the temple in Jerusalem, so that the king and his nobles, his wives and his concubines might drink from them.

The king had thrown this party in honor of Bel, the pagan god that he, Belshazzar, was named after. Belshazzar sat on his throne above all the others and led them in drinking a toast to their pagan gods.

Most of the time, the women were not invited but Belshazzar threw all restraints aside and did exactly as he pleased.

Isaiah 5:22-24
22Woe unto them that are mighty to drink wine, and men of strength to mingle strong drink: 23which justify the wicked for reward, and take away the righteousness of the righteous from him! 24Therefore as the fire devoureth the stubble, and the flame consumeth the chaff, so their roots shall be as rottenness, and their blossom shall go up as dust: because they have cast away the law of the LORD of host, and despised the word of the Holy One of Israel.

Belshazzar was a very sacrilegious person; he was also stupid. He was literally celebrating his own funeral, but he didn’t know it. Jeremiah had predicted this almost a hundred years before in exact detail, everything that was going to happen that night.

Remember the statue, after the head of gold, which was Babylon, the next empire to take over was the Medo-Persians. Jeremiah spoke about how this would happen, Jeremiah chapters 50 and 51. At the very moment Belshazzar and his guests were becoming more and more drunken, drinking from the holy vessels of the God of Jerusalem, their enemies were coming under the walls of the city!

Cyrus was the leader of the Medes and Persians. They were determined to conquer Babylon; but remember last Sunday I taught that the walls were so high that no one could climb over, and one historian said that they had enough food, water and provisions to last for more than twenty years.

So, Cyrus devised another plan. He took the best of his army and placed them, half of them at the place where the river entered the city, and the other half where it ran out. Then he took the rest of his army where the Euphrates passed a huge swamp and he diverted the river away from the city and he told his men to wait until they could walk through it and they waited until they could stand up and walk through the river, one by one without being seen. They began to come into the city.

King Belshazzar thought that Babylon could never be taken. Suddenly the finger of God appeared and wrote on the plaster of the wall.

Daniel 5:5-7
5In the same hour came forth fingers of a man’s hand, and wrote over against the candlestick upon the plaster of the wall of the king’s palace: and the king saw the part of the hand that wrote. 6Then the king’s countenance was changed, and his thoughts troubled him, so that the joints of his loins were loosed, and his knees smote one against another. 7The king cried aloud to bring in the astrologers, the Chaldeans, and the soothsayers. And the king spake, and said to the wise men of Babylon, Whosoever shall read this writing, and shew me the interpretation thereof, shall be clothed with scarlet and have a chain of gold about his neck, and shall be the third ruler in the kingdom.

In one brief moment, the evil king became a shivering, helpless mortal. He called for his wise men, but to no avail. They couldn’t read the handwriting; neither could they interpret it.

The Queen Mother, maybe Nebuchadnezzar’s daughter, had watched her father live like an animal for seven years. She remembered Daniel and began to recall the ministry of this man.

Daniel 5: 12-14
12Forasmuch as an excellent spirit, and knowledge, and understanding, interpreting of dreams, and shewing of hard sentences, and dissolving of doubts, were found in the same Daniel, whom the king named Belteshazzar: now let Daniel be called, and he will shew the interpretation. 13Then was Daniel brought in before the king. And the king spake and said unto Daniel, Art thou that Daniel, which art of the children of the captivity of Judah, whom the king my father brought out of Jewry? 14I have even heard of thee, that the spirit of the gods is in thee, and that light and understanding and excellent wisdom is found in thee.

Then Belshazzar offered Daniel a bribe:

Daniel 5:16-17
16And I have heard of thee, that thou canst make interpretations, and dissolve doubts: now if thou canst read the writing, and make known to me the interpretation thereof, thou shalt be clothed with scarlet, and have a chain of gold about thy neck, and shalt be the third ruler in the kingdom. 17Then Daniel answered and said before the king, Let thy gifts be to thyself, and give thy rewards to another; yet I will read the writing unto the king and make known to him the interpretation.

After Daniel refused the gifts, he reviewed the king’s heritage and history. He reminded him of how his grandfather Nebuchadnezzar had been reduced to an animal, until he finally acknowledged the Most High God. This was to help Belshazzar see himself in the same place as Nebuchadnezzar in relation to God. Daniel always told it like it was.

Daniel 5:22-24
22And thou his son, O Belshazzar, hast not humbled thine heart, though thou knewest all this; 23But hast lifted up thyself against the Lord of heaven; and they have brought the vessels of his house before thee, and thou, and thy lords, thy wives, and thy concubines, have drunk wine in them; and thou hast praised the gods of silver, and gold, of brass, iron, wood, and stone, which see not, nor hear, nor know: and the God in whose hand thy breath is, and whose are all thy ways, hast thou not glorified: 24Then was the part of the hand sent from him; and this writing was written.

In Jeremiah Chapters 51 and 52, Jeremiah had a lot to say about how God was going to destroy Babylon. Of all the stupid parties in history, this party was the most stupid. At the very moment Belshazzar and his guests were becoming more drunk and resentful to God, drinking their liquor from the holy vessels of the God of Jerusalem, their enemies were coming under the walls of the city.

Not only did Daniel charge the king with premeditated sin and profane sacrilege, but also with pagan sacrifice. He told him in front of all of the court followers how foolish he was, to do these things, and that God holds in His hand your life and all your ways.

I’d like to read Job’s comment in Job 12:10: In whose hand is the soul of every living thing, and the breath of all mankind.

We breathe so naturally and never think about it, but the day God decides He doesn’t want us to breathe any longer, it’s all over. Many people use the breath He gave them to take His Name in vain and to curse Him, but how foolish it is for any of God’s creatures to mock the Creator Who is in charge.

That very night Belshazzar was slain and Darius the Mede took over at the age of 62. It was curtains for Belshazzar when he took the holy vessels of God and desecrated them.

What about us? We don’t have personal access to the ancient cups of gold, but the Bible says our
bodies are temples of the Lord, the vessels of God. When we sin, and we sin in many ways, when we partake of anything that would corrupt us in any way, because we belong to the Lord, we sin.

The end of the age will be marked by the extinction of the Gentile world powers.

2 Timothy 3:1-5
1This know also, that in the last days perilous time shall come. 2For men shall be lovers of their own selves, covetous, boasters, proud, blasphemers, disobedient to parents, unthankful, unholy, 3Without natural affection, truce-breakers, false accusers, incontinent, fierce, despisers of those that are good, 4Traitors, heady, highminded, lovers of pleasures more than lovers of God; 5Having a form of godliness, but denying the power thereof: from such turn away.