The Apostle Paul Is Jailed 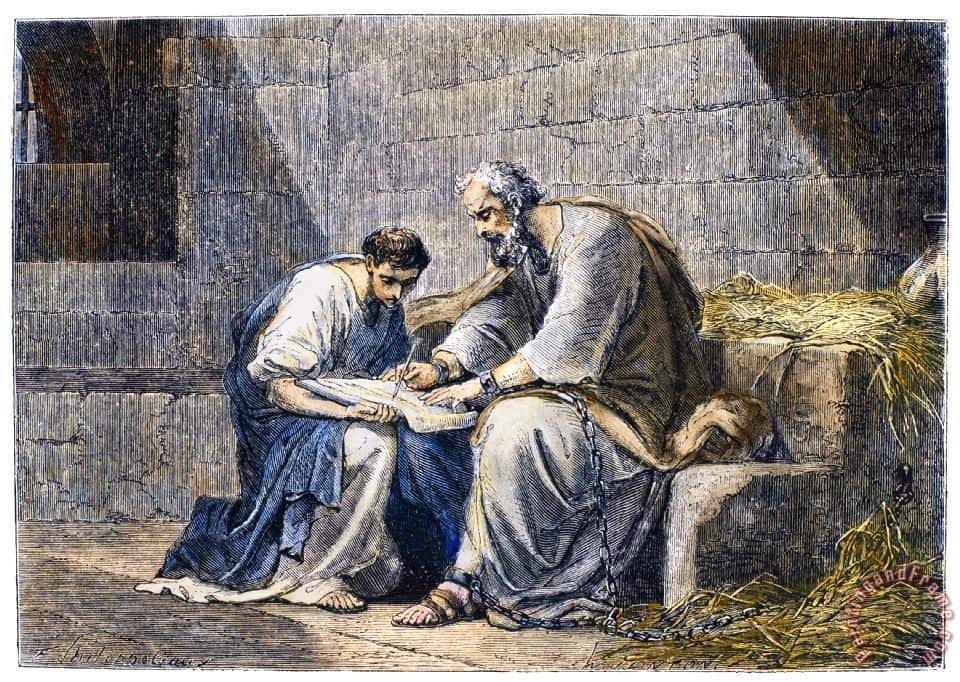 The Apostle Paul Is Jailed

13And on the sabbath we went out of the city by a river side, where prayer was wont to be made; and we sat down, and spake unto the women which resorted thither.
14And a certain woman named Lydia, a seller of purple, of the city of Thyatira, which worshiped God, heard us: whose heart the Lord opened, that she attended unto the things which were spoken of Paul.
15And when she was baptized, and her household, she besought us, saying, If ye have judged me to be faithful to the Lord, come into my house, and abide there. And she constrained us.
16And it came to pass, as we went to prayer, a certain damsel possessed with a spirit of divination met us, which brought her masters much gain by soothsaying:
17The same followed Paul and us, and cried, saying, These men are the servants of the Most High God, which shew unto us the way of salvation.
18And this did she many days. But Paul, being grieved, turned and said to the spirit, I command thee in the name of Jesus Christ to come out of her. And he came out the same hour.
19And when her masters saw that the hope of their gains was gone, they caught Paul and Silas, and drew them into the marketplace unto the rulers,

25And at midnight Paul and Silas prayed, and sang praises unto God: and the prisoners heard them.
26And suddenly there was a great earthquake, so that the foundations of the prison were shaken: and immediately all the doors were opened, and every one’s bands were loosed.
27And the keeper of the prison awaking out of his sleep, and seeing the prison doors open, he drew out his sword, and would have killed himself, supposing that the prisoners had been fled.
28But Paul cried with a loud voice, saying, Do thyself no harm: for we are all here.
29Then he called for a light, and sprang in, and came trembling, and fell down before Paul and Silas.
30And brought them out, and said, Sirs, what must I do to be saved?
31And they said, Believe on the Lord Jesus Christ, and thou shalt be saved, and thy house.
32And they spake unto him the word of the Lord, and to all that were in his house.
33And he took them the same hour of the night, and washed their stripes; and was baptized, he and all his, straightway.
34And when he had brought them into his house, he set meat before them, and rejoiced, believing in God with all his house.
35And when it was day, the magistrates sent the sergeants, saying, Let those men go.

Paul had had a vision in the night and he saw a man of Macedonia praying, saying, “Come over into Macedonia and help us.” After he had seen the vision, Paul decided to leave at once, so he and Silas came to the chief city there of Macedonia.

On the sabbath they went out to the river side where women were gathered to have prayer. The people of Macedonia knew nothing about Paul and Silas and were not aware of its need of Christ, but its dire need of the Gospel appealed to Paul and brought him to offer help.

That there were no synagogues in Philippi indicates the scarcity of Jews living in the city. Because of Jewish ceremonial teachings, these places of prayer were located near a river or on the seashore.

This was Paul’s first congregation in Philippi, not a very promising one: all women and no men, no building to meet in, no influence in the city to count on; nevertheless, it grew into one of the most influential churches of all the churches that Paul founded.

Among the women gathered at the river was one named Lydia. She was evidently a successful business woman and was obviously financially independent. Greater than her financial and business abilities was her godliness. Her heart had been prepared before this day for what she was about to experience. The Holy Spirit, referred to as the Holy Ghost, is always in advance of us when we are trying to find our way to do God’s will. She accepted Christ and was baptized and influenced all her household. She invited Paul and Silas to come to her house.

As they went to prayer, a certain damsel possessed with a spirit of divination, Acts 16:17, above, followed Paul and Silas and cried saying, “These men are the servants of the Most High God, which shew unto us the way of salvation.”

The poor girl was a slave, controlled by her masters to whom she had proved so popular and profitable. She had heard the apostles preach and had retained in her confused mind some of their statements. The evil spirits in her, even as the evil spirits in the days of Christ, were led to testify of Christ, as evidenced in

Saying, Let us alone; what have we to do with Thee, Thou Jesus of Nazareth? art Thou come to destroy us? I know Thee who Thou art, the Holy One of God.

And devils also came out of many, crying out, and saying, Thou art Christ the Son of God. And He rebuking them suffered them not to speak: for they knew that He was Christ.

Paul was greatly annoyed and troubled by the girl’s cries. He, like Christ, would not receive the testimony of a demon. We wonder why Paul waited many days before acting against this one. No reason is given but the choice of time was not Paul’s. He did not do this miracle at his own whim. Paul did each miracle at the direction of the Holy Spirit who inspired him.

The girl was known as an accurate soothsayer. Perhaps the Lord wanted her testimony to be heard for a time, but there may have been a different reason for waiting.

The Lord knew what would follow when the girl was rescued from the evil spirit who possessed her. Paul’s work in Philippi would be ended. Perhaps the rescue was delayed to give Paul more time for his preaching. Paul was grieved and we need not suppose he was merely annoyed by the continuous shouting behind him. He was saddened by the girl’s plight. Her mind and will were displaced by the spirit. Her feet and voice were used by him, not her.

In the name of Jesus Christ, Paul ordered the evil spirit to set the girl free, and he did. She was still the slave of human masters but she was no longer in bondage to an evil spirit. Her masters had been free men, they thought, but they were enslaved by greed. These greed-driven masters could take no joy in a girl rescued from a demon. They felt only anger at their loss of profits and they wanted revenge.

Enraged at their loss, they seized Paul and Silas and took them to the marketplace unto the rulers and told them that they exceedingly troubled the city and taught customs which were not lawful. The multitude rose up against them and the magistrates took off their clothes and commanded that they be beaten with many stripes and then cast them into prison. They were put into the inner prison; their feet were placed in stocks. If the magistrates had known those Jews were also Roman citizens, they certainly would not have beaten and imprisoned them.

With heroic cheerfulness Paul and Silas prayed and sang and passed off the night of darkness. Perhaps this is what Job meant when he spoke of “songs in the night”.

But none saith, Where is God my maker, who giveth songs in the night;

That’s one of the blessed realities of living for God: the experience of being able in the midst of despair to have a song in our hearts for Him. God does not always manifest Himself in a still, small voice. On this occasion He manifested Himself through an earthquake. This was God’s reaffirmation for His servants. It was His answer to their prayer and song.

In Verses 27 and 28 of Acts 16, above, the jailer, startled from sleep and catching sight of the prison door standing open, he instantly drew his sword and was on the verge of killing himself. He thought the prisoners had escaped and he knew he would have to pay with his life for their escape. Evidently no prisoner used the occasion to escape.

A new fear, more awful than the former, seized the jailer. The jailer became convicted of his wickedness and realized the dire need of salvation. He could not have asked a more important question than, “What must I do to be saved?”.

They said, “Believe on the Lord Jesus Christ and thou shalt be saved and thy house.” There was an immediate response on the part of the jailer to the invitation and the apostles baptized him and his entire household. The jailer had called for a light that might guide his feet into the inner prison of the suffering saints, but when he cried, “Sirs, what must I do to be saved?” he was calling for another Light that might guide his feet in the way he should walk/live.

As a flashback, the jailer is bathing their wounds, taking them into his house and spreading the best he had before them, eating with them and rejoicing, believing in God with all his household. The jailer was well aware that the apostles had not eaten since their arrest and the beatings, and even though it was still night, he offered them the courtesy of his hospitality.

Just as God, by His Spirit, directed those men and equipped them with His power to evangelize cities, He is also doing this today, around the world. As men and women are obedient to His guidance, they are empowered by His Holy Spirit to reach men, women and children who are lost in darkness, “lost” in sin’s entanglements.

If we are not going forward in the way of God, we are going backwards. God observes our lives and will reward us if we live up to our opportunities and responsibilities. While we are living on this earth, therefore, let us make good use of the opportunities we have.

4And as they went through the cities, they delivered them the decrees for to keep, that were ordained of the apostles and elders which were at Jerusalem.
5And so were the churches established in the faith, and increased in number daily.

5Trust in the LORD with all thine heart; and lean not unto thine own understanding.
6In all thy ways acknowledge him, and he shall direct thy paths.