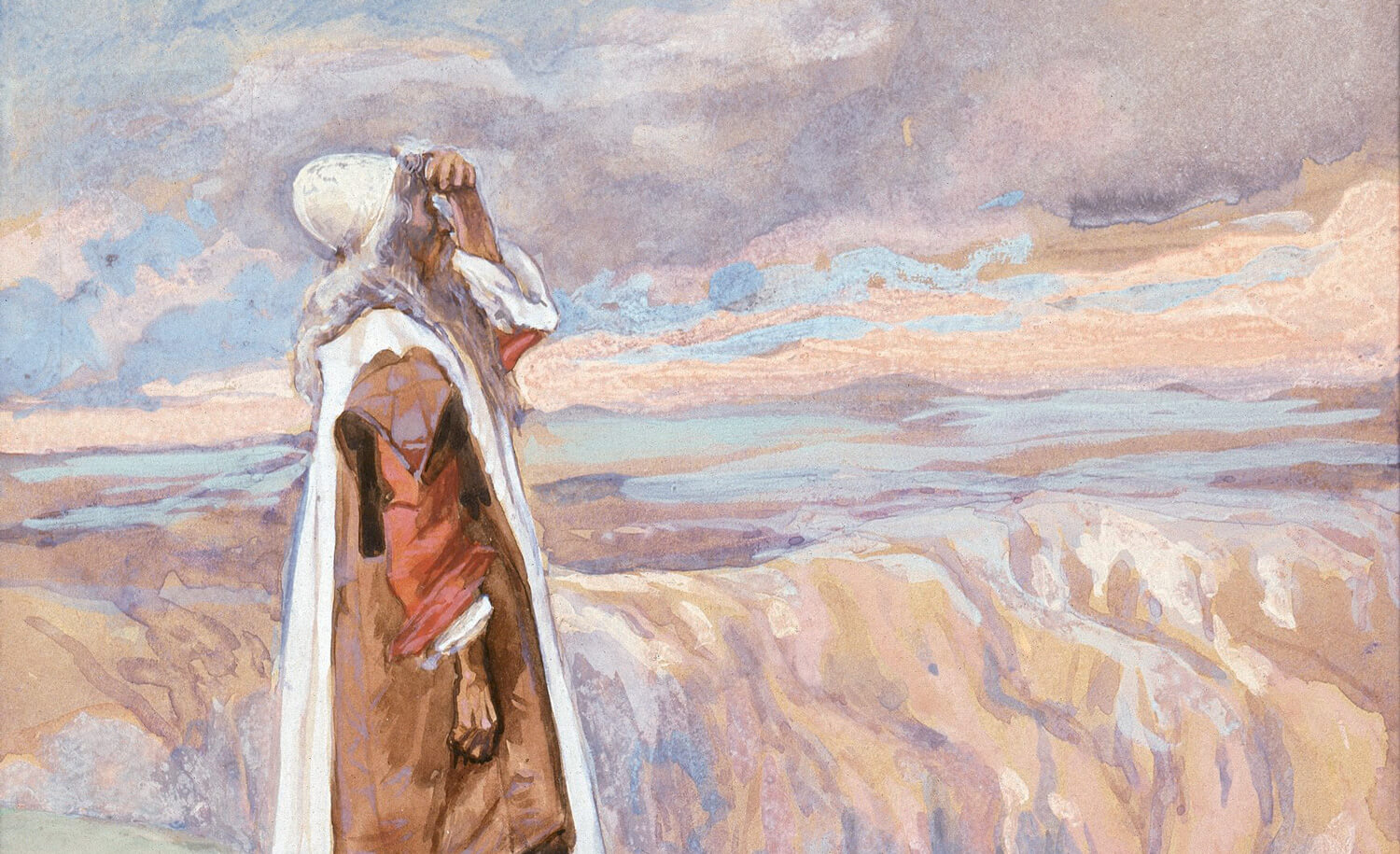 7Remember the days of old, consider the years of many generations: ask thy father, and he will shew thee; thy elders, and they will tell thee. 8When the most High divided to the nations their inheritance, when he separated the sons of Adam, he set the bounds of the people according to the number of the children of Israel. 9For the LORD’s portion is his people; Jacob is the lot of his inheritance. 10He found him in a desert land, and in the waste howling wilderness; he led him about, he instructed him, he kept him as the apple of his eye.

5So Moses the servant of the LORD died there in the land of Moab, according to the word of the LORD. 6And he buried him in a valley in the land of Moab, over against Bethpeor: but no man knoweth of his sepulchre unto this day. 7And Moses was an hundred and twenty years old when he died: his eye was not dim, nor his natural force abated. 8And the children of Israel wept for Moses in the plains of Moab thirty days: so the days of weeping and mourning for Moses were ended. 9And Joshua the son of Nun was full of the spirit of wisdom; for Moses had laid his hands upon him: and the children of Israel hearkened unto him, and did as the LORD commanded Moses. 10And there arose not a prophet since in Israel like unto Moses, whom the LORD knew face to face, 11In all the signs and the wonders, which the LORD sent him to do in the land of Egypt to Pharaoh, and to all his servants, and to all his land, 12And in all that mighty hand, and in all the great terror which Moses shewed in the sight of all Israel.

In Deuteronomy 34:5-8, above, we see there were no earthly accolades for Moses when he died in isolation in Moab. He had long since forsaken the power and pomp and prestige that could have been his as a prince in Egypt. Choosing instead to suffer affliction with the people of God, he was pleased to look forward to the reward that would be his as the servant of the LORD.

24By faith Moses, when he was come to years, refused to be called the son of Pharaoh’s daughter; 25Choosing rather to suffer affliction with the people of God, than to enjoy the pleasures of sin for a season; 26Esteeming the reproach of Christ greater riches than the treasures in Egypt: for he had respect unto the recompence of the reward.

The Bible allows us to follow Moses’ life from the time of his birth to the time of his death. This lesson is a reminder that by trusting in the Lord and preparing for death, we can depart this earthly life with peace and hope, knowing the Lord is faithful and His promises are true.

Although Moses was not permitted by God to enter the land of Canaan, the biblical account of Moses can be honored for the place he filled in God’s plan, but the glory belongs to Jesus.

The tomb of Moses was hidden that we might give attention to the empty tomb which speaks of our risen Lord who ever lives to make intercession for us. Because Jesus lives, we shall live also and one day enter a better Promised Land.

God is looking for the same ingredients and qualities that Moses had. Moses was an unselfish man.

Self-centered motives annul the purpose of God in our lives. Personal gain cannot be misconstrued to mean godly gain. It is for Christ and His glory that we labor on. Unless all glory is ascribed to the Lord, our works are in vain.

Moses was sensitive to the needs of men. Moses identified with the people to whom he ministered. It is this quality, suffering with those who suffer and rejoicing with those who rejoice, that builds the kingdom of God.

Moses had confidence in the wisdom of God. Had he doubted, he would have given up at the first testing of his faith. Moses knew what was the will of God and rested confidently in that fact.

The time came when Moses was to die. The many years of his dedicated work for God were to come to an end. Long before that time came, the LORD began to prepare Joshua for his future role as the leader of His people.
Joshua was taken with Moses on one of his trips up Sinai during the reception of the Law.

12And the LORD said unto Moses, Come up to me into the mount, and be there: and I will give thee tables of stone, and a law, and commandments which I have written; that thou mayest teach them. 13And Moses rose up, and his minister Joshua: and Moses went up into the mount of God. 14And he said unto the elders, Tarry ye here for us, until we come again unto you: and, behold, Aaron and Hur are with you: if any man have any matters to do, let him come unto them.

15And Moses turned, and went down from the mount, and the two tables of the testimony were in his hand: the tables were written on both their sides; on the one side and on the other were they written. 16And the tables were the work of God, and the writing was the writing of God, graven upon the tables. 17And when Joshua heard the noise of the people as they shouted, he said unto Moses, There is a noise of war in the camp. 18And he said, It is not the voice of them that shout for mastery, neither is it the voice of them that cry for being overcome: but the noise of them that sing do I hear.

In Deuteronomy 34:9-12, above, these verses highlight the legacy that Moses and others like him leave, even after death. One example: Joshua and Caleb were the only two faithful believing spies out of twelve who brought back a positive report from the survey of Canaan.

The influence of individuals is not limited to their lifetime. Moses’ influence would continue to lead the people through its heritage in Joshua. Moses’ influence beyond the grave compels people today to be mindful of the impact their lives continually have on others.

Moses’ last days communicate to us a sense that his death was as much a part of God’s plan as were the events of his life.

Dying was a meaningful final stage in Moses’ long life, watched over and directed by God, as all his life had been. By being present with Moses as he approached death, God helped Moses to accept death as a prelude to better things to come.

We sense in Deuteronomy 31:15, above, the Presence of the LORD was noted with the pillow of a cloud. The cloud once again made the people aware of the power and presence of the LORD, as with Moses. As Moses spoke his final words to the children of Israel, God confirmed not only His words, but the power of his ministry.

Moses’ ministry had been a powerful one throughout their deliverance during the exodus and the wilderness wanderings. Recorded in Scripture is an account of the formal installation of Joshua as Moses’ successor. We can read about it.

This designation of Joshua as a leader to be honored and obeyed was made publicly by Moses at God’s command so that Joshua’s prominence would not be seen as a power grab, but as a divine bequest.

Moses was soon to die but Joshua would step in and carry on the work. Moses had ascended and descended Mount Sinai often in the course of receiving the revelation of God’s law.

Here on a Moabite mountain Moses would have his final mountain experience with God before leaving this life. If men had known the location of his burial place, they might have made it a shrine and given it veneration beyond anything any man deserves.

See Deuteronomy 34:5-8, above. By Moses’ act of disobedience in smiting the rock, he destroyed his opportunity to share in Israel’s final triumph. He had to settle for just a glimpse of the Promised Land, toward which he had toiled for many years.

1Then came the children of Israel, even the whole congregation, into the desert of Zin in the first month: and the people abode in Kadesh; and Miriam died there, and was buried there. 2And there was no water for the congregation: and they gathered themselves together against Moses and against Aaron. 3And the people chode with Moses and spake, saying, Would God that we had died when our brethren died before the LORD! 4And why have ye brought up the congregation of the LORD into this wilderness, that we and our cattle should die there? 5And wherefore have ye made us to come up out of Egypt, to bring us in unto this evil place? it is no place of seed, or of figs, or of vines, or of pomegranates; neither is there any water to drink. 6And Moses and Aaron went from the presence of the assembly unto the door of the tabernacle of the congregation, and they fell upon their faces: and the glory of the LORD appeared unto them. 7And the LORD spake unto Moses, saying, 8Take the rod, and gather thou the assembly together, thou, and Aaron thy brother, and speak ye unto the rock before their eyes, and it shall give forth his water, and thou shalt bring forth to them water out of the rock: so thou shalt give the congregation and their beasts drink. 9And Moses took the rod from before the LORD, as he commanded him. 10And Moses and Aaron gathered the congregation together before the rock; and he said unto them, Hear now, ye rebels; must we fetch you water out of this rock? 11And Moses lifted up his hand and with his rod he smote the rock twice: and the water came out abundantly, and the congregation drank, and their beasts also. 12And the LORD spake unto Moses and Aaron, Because ye believed me not, to sanctify me in the eyes of the children of Israel, therefore ye shall not bring this congregation into the land which I have given them. 13This is the water of Meribah; because the children of Israel strove with the LORD, and he was sanctified in them.

The tragedy is that once an opportunity is neglected, there is no way of regaining it. We pass over the road of life but once and lost opportunities are gone forever.

And Moses was an hundred and twenty years old when he died: his eye was not dim, nor his natural force abated.

This means that his eyes were clear and he was still full of youthful vigor and freshness.

Here on a Moabite mountain…God said it was enough and took Moses Home, Heaven being “Home.” God Himself buried Moses’ body in a valley somewhere northwest of Mount Nebo, but did not reveal to anyone exactly where. This was wise. There was no prophet in Israel ‘like unto Moses.’

More importantly, God wanted the people to look beyond Moses to Another. Moses was just a “type” pointing to Christ. The deliverance from Egypt, under the cover of “the Blood of the Passover Lamb,” was just a “shadow” pointing to the reality of our crucified and risen Saviour, Jesus Christ.

…Behold the Lamb of God which taketh away the sin of the world.