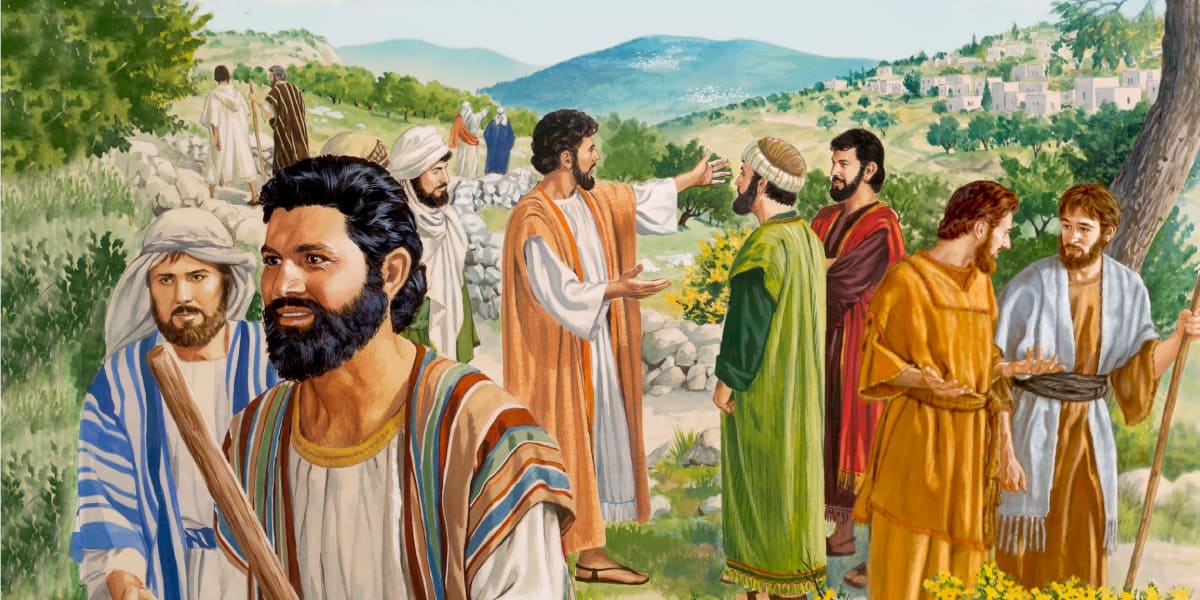 1After these things the Lord appointed other seventy also, and sent them two and two before his face into every city and place, whither he himself would come. 2Therefore said he unto them, The harvest truly is great, but the labourers are few: pray ye therefore the Lord of the harvest, that he would send forth labourers into his harvest. 3Go your ways: behold I send you forth as lambs among wolves. 4Carry neither purse, nor scrip, nor shoes: and salute no man by the way. 5And into whatsoever house ye enter, first say, Peace be to this house. 6And if the son of peace be there, your peace shall rest upon it: if not, it shall turn to you again. 7And in the same house remain, eating and drinking such things as they give: for the labourer is worthy of his hire. Go not from house to house. 8And into whatsoever city ye enter, and they receive you, eat such things as are set before you. 9And heal the sick that are therein, and say unto them, The kingdom of God is come nigh unto you. 10But into whatsoever city ye enter, and they receive you not, go your ways out into the streets of the same, and say, 11Even the very dust of your city, which cleaveth on us, we do wipe off against you: notwithstanding be ye sure of this, that the kingdom of God is come nigh unto you. 12But I say unto you, that it shall be more tolerable in that day for Sodom, than for that city.

17And the seventy returned again with joy saying, Lord, even the devils are subject unto us through thy name. 18And he said unto them, I beheld Satan as lightning fall from heaven. 19Behold, I give unto you power to tread on serpent and scorpions, and over all the power of the enemy: and nothing shall by any means hurt you. 20Notwithstanding in this rejoice not, that the spirits are subject unto you; but rather rejoice, because your names are written in heaven.

Chapter 10 marks a break in the narrative; therefore, it is introduced with the phrase after these things.

Chapter 9 records a variety of activity and teaching, culminating in Jesus’ encounter with three individuals who seemingly wanted to follow Jesus but did not comprehend the full meaning of discipleship.

This provides a good background for Jesus’ commissioning of the 70 in Chapter 10 who did understand what it meant to commit themselves to Him.

In some ways, Jesus’ sending out this large number foreshadowed the church’s great missionary movements of the future. They had one goal: introducing lost people to the one and only Savior.

Jesus chose the 12 apostles for a special ministry and mission. He wanted them as primary witnesses to His teaching and His resurrection in Acts 1:22. He promised them also that in His coming kingdom they would sit on 12 thrones, judging the 12 tribes of Israel, Matthew 19:28. The 12 were therefore a limited group. Jesus did not add to them nor could there be more than 12 for the 12 thrones.

Beginning from the baptism of John, unto that same day that he was taken up from us, must one be ordained to be a witness with us of his resurrection.

And Jesus said unto them, Verily I say unto you, That ye which have followed me, in the regeneration when the Son of man shall sit in the throne of his glory, ye also shall sit upon twelve thrones, judging the twelve tribes of Israel.

This does not mean Jesus quit choosing and calling people for His service; however, Jesus needed many laborers to get His work done.

This lesson takes us to the beginning of the last six months before the cross. Because the time was short and because He wanted His followers to learn by doing, He chose 70 and sent them out into the towns and villages on the east side of Jordan. Before sending them, He gave them wise instructions.

The first command was to pray not for themselves but for the work. They were to ask God to send forth laborers into His harvest.

The first requirement for their own success in the service of the Lord was to get a new vision of the harvest field of the world. They needed to be challenged by the urgency of the tremendous need. They needed a passion that would not only move them but move others to join them in the work.

In today’s world, the harvest is still great and in view of the population explosion, the laborers are still very few. Surely, the whole church needs to pray this prayer: to get a new vision of the harvest field of the world and the urgency of the need, praying for others to join in this tremendous need.

Jesus did not send His disciples out with the human equipment of an earthy conquering army. Rather, they were sent with a commission, sent with a message. They were to go out in utter total dependence on the Lord to meet their needs.

They had to be prepared for hostility which might present physical danger to them. Jesus drew a parallel between them and sheep who grazed in the country where wolves roamed.

They must be prudent and watchful. Even though they had an urgent mission, they must not provoke unnecessary confrontations; however, they should not be paralyzed by fear, for they were not defenseless. They were God’s sheep and were under His care and protection.

It would seem from Verse 4 (above) that the disciples were not to burden themselves with useless baggage. Neither were they to worry about how they would survive, nor were they to engage in the lengthy and tedious Eastern greetings, which were often meaningless and time-consuming.

They were to go straight to their destination. They were to be so absorbed in their task and Christ’s commission that they would not turn aside for anything. Then, when they reached the city assigned to them, they were not to act like beggars but like ambassadors for the King.

As they entered a house they would salute the inhabitants with a greeting of peace. If they desired peace from God, real peace would rest on that household. If not, peace would return upon the disciples so that rejection would not discourage them.

Once the disciples found a house that welcomed them, they were to stay there and make it a center for the work of the Lord in that city. They were not to accept hospitality of others, lest entertainment become central instead of the gospel.

The disciples were to be content with the living accommodations and the food provided for them. They were not to be hard to please. These provisions were to be their wages.

The 70 also had to be prepared to be rejected, not just by individuals but by entire communities. In such cases, they were not to engage in heated debate, but move quickly to another town. Before they left, they were to warn the populace about what they had done and the resulting judgment. Receiving Jesus into their hearts meant life for them; rejecting Him meant judgment.

To the towns where they found no welcome, they were to wipe off the dust of the city that clung to them. They would share in the woes of others who had failed to show true repentance.

Regarding Verse 17 (above): The power to cast out demons seems to have brought these disciples the greatest sense of victory. If they did not realize it before, they knew then that two spiritual kingdoms are struggling to control the world.

There are many opinions concerning what Jesus meant in Verse 18 (above). Some believe that He was speaking of the effect produced on Satan’s kingdom by the preaching of the 70 disciples. It is as if He said I saw in spirit, or with my mind’s eye, Satan’s power declining and himself rapidly losing his dominion in consequence of your ministry.

Others believe or interpret the statement to mean: Marvel not that the devils are subject unto you, for I beheld their prince fall and it is no wonder that his servants now fall before you.

Others believe it was the intention of the Lord to warn the disciples against vain glory, meaning be not puffed up because the devils are subject to you. Remember that Satan fell through pride.

Like all of God’s servants, they were channels through which Christ’s power flowed. He uses people, human hands, feet and lips; yet it is God who is always the Source of power.

Regarding Verse 20 (above). One of the great truths that God’s people neglect is that He wants His people to be rejoicing disciples. Among the fruit of the Spirit which Paul mentioned in his letter to the Galatian believers is joy.

22But the fruit of the Spirit is love, joy, peace, longsuffering, gentleness, goodness, faith, 23Meekness, temperance: against such there is no law.

Not only should Christians have joy, but it should be abundant! The joy of the believer is to be constant.

How that in a great trial of affliction the abundance of their joy and their deep poverty abounded unto the riches of their liberality.

As sorrowful, yet always rejoicing; as poor, yet making many rich; as having nothing, and yet possessing all things.

Rejoice in the Lord alway: and again I say, Rejoice.

We should rejoice because we are registered citizens of the Kingdom of Heaven. We have been chosen through Christ, pardoned, accepted and redeemed.

The harvest is the Lord’s. He knows when it is ripe, when it should be gathered in. Even though the harvest belongs to the Lord, He has never made it so that fruit or vegetables, or grains are harvested without the help of men.

Unless men gather fruit from the trees, it will drop to the ground and rot. Unless men harvest the wheat it will be left to the elements of wind and rain and the snow of winter and becomes useless. Cotton does not transport itself to the gin and potatoes do not lift themselves from the ground and move to the warehouse of their own volition.

In like manner, God has chosen to use men, born again men, to gather in the lost. Harvesting is hard work; it is neither a picnic nor an excursion and there is a season of harvest. Fail to harvest, then the crop is lost.

How sad is the cry of:

The harvest is past, the summer is ended, and we are not saved.