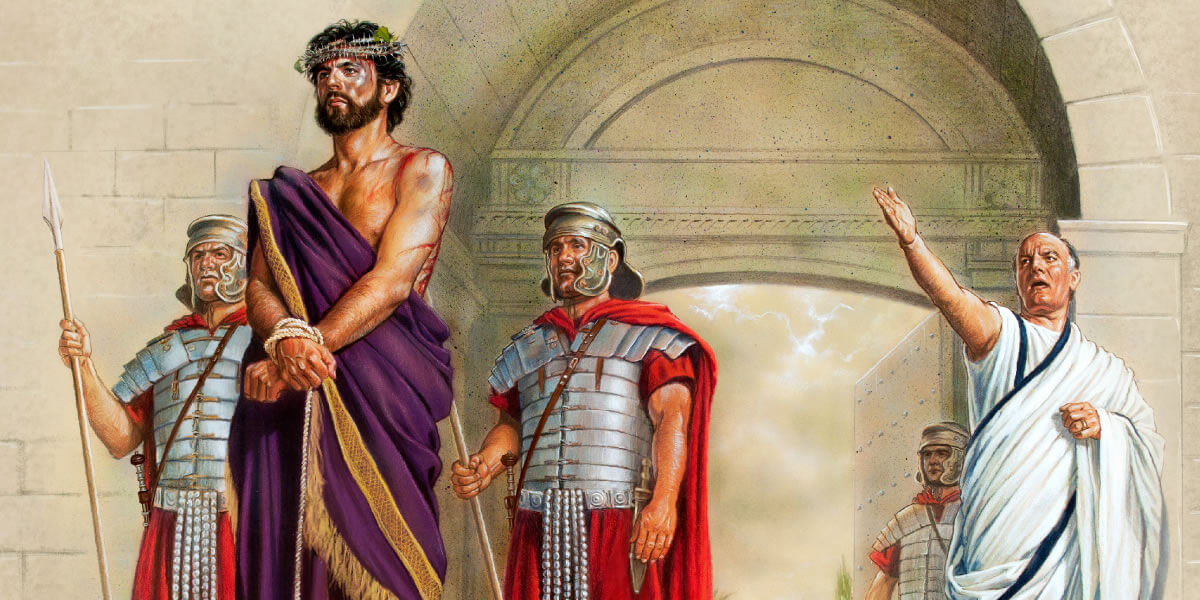 Look at Him there, before that jeering mob! His back is raw and bleeding; a crown of thorns has been pressed into His brow. He is being mocked with a purple robe that they had put on him.

He was soon to be hung on a Roman cross. In human terms, they didn’t think He had much to offer.

He spent His life among common people. Born of a humble woman he was known as the son of a carpenter. Only once He traveled outside the country of His birth. That was when He went to Egypt as a baby fleeing from King Herod.

By the same standard of the world He had neither position nor wealth but they didn’t know our Saviour. But listen as we study the great things about Him. Here we are confronted with the greatest Human Being who ever lived.
(1) As a baby, He startled a king.
(2) As a boy, He astonished the learned doctors of the land.
(3) As a man, He ruled the forces of nature, walked on water and stilled a raging storm.
(4) He commanded angels and demons and they rushed to do His bidding.
(5) He never wrote a book, yet libraries are filled with volumes about Him.

“And there are also many other things which Jesus did, the which, if they should be written every one, I suppose that even the world itself could not contain the books that should be written.”
(6) He never composed a lyric yet more songs have been inspired by Him than any other man in history.
(7) He never founded a college, yet through the ages, the most astute and brilliant of men have sat at His feet.
(8) He never studied medicine, yet He went about doing good, healing the sick, and raising the dead to life again.
(9) He never marshaled an army, yet He had more loyal followers than all the Napoleons of earth could ever hope to command.

They saw Him only in His humanity: frail and silent before the crowd. They little realized the countless love and unswerving submission to the Heavenly Father that kept Him there.

The hymn writer was absolutely correct when he wrote, “He could have called 10,000 angels, but He died alone for you and me.”

Yes, all the power of deity was His; with but a word He could have utterly destroyed the world He had created, but He had come as God in human flesh, to die for us and because He was Divine, His sacrifice paid the price for all human sin and because He arose we can be sure of eternal life in and through Him.

SPECTATORS AT THE CROSS

Matthew 27:36
“And sitting down they watched Him there.”

The weeping mother of Jesus, the beloved disciple, John, Mary Magdaline, Joseph of Arimathaea, also Pilate and two thieves: a cross-section of all the human race was there to see Jesus die.

Let us then prayerfully take some representatives from the great multitude and see with what eyes and what hearts they watched Jesus die. Let’s examine our own hearts and find who represented us that day sitting down or standing near/before the cross.

Fanny Crosby wrote, “Jesus Keep Me Near the Cross.” If Jesus were crucified publicly in our town today, before the great surging, taunting, laughing multitude, would we be right near the cross, an inner circle, Christian? Would we, like others, be looking from a distance, or fleeing?

Everywhere that sinners hear the Gospel and reject it, the Dear Savior is hated and scorned and nailed again to the cross.