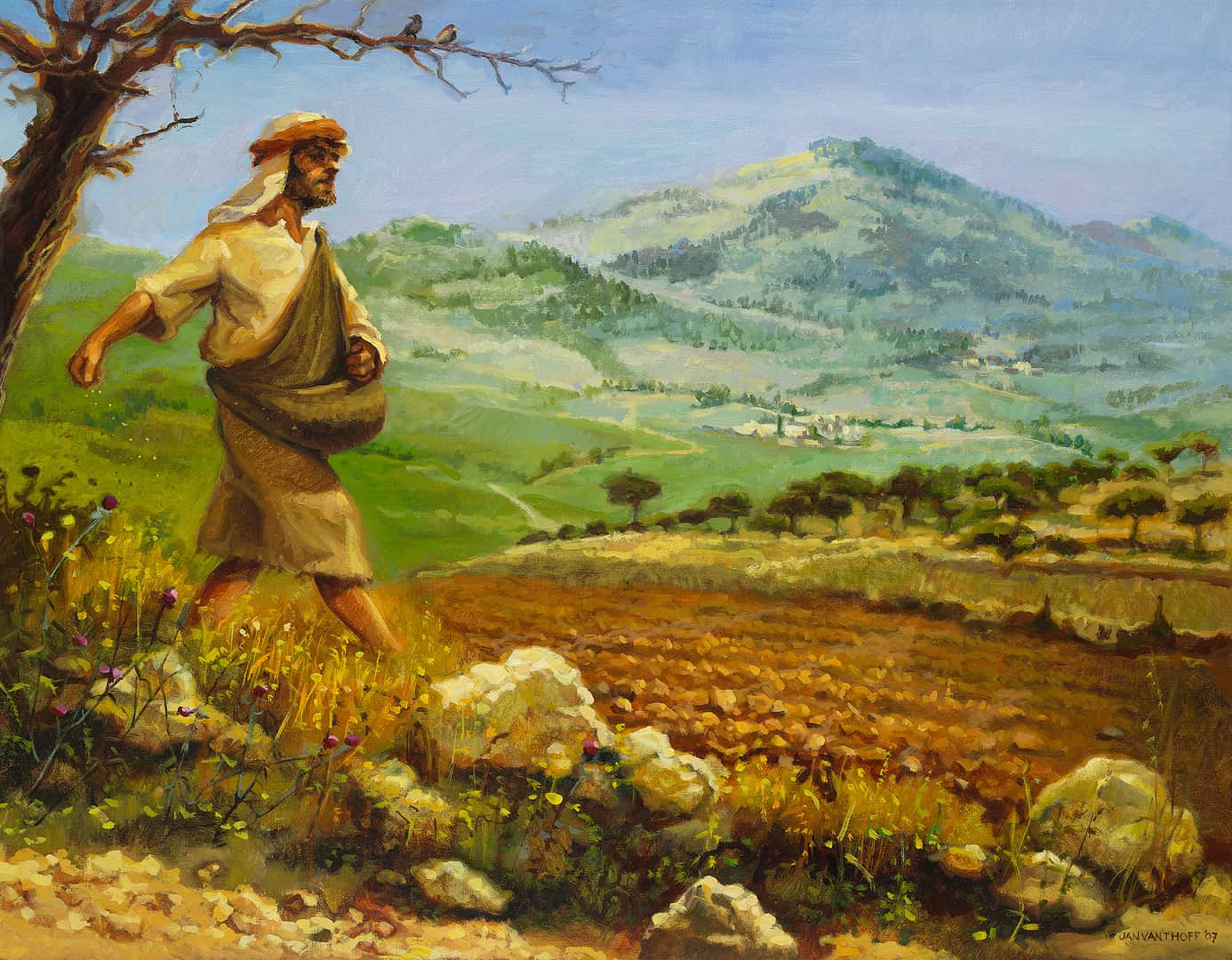 The disciples of Jesus were surprised that day in Capernaum by the Sea on Galilee when Jesus spoke the series on parables recorded in Matthew 13. But they learned that there is more to parables’ teaching than just telling stories.

The word parable is used 48 times in Matthew, Mark and Luke and twice in Hebrews and nowhere else in the New Testament. By using parables, Our Lord was seeking to interest and awaken those whose spiritual senses were growing dull. By telling stories with hidden meanings He was arousing their interest and giving them opportunities to be saved. The same message that awakens one will harden another. Those with no spiritual hunger for truth and salvation would not understand His teaching.

God’s Word is powerful but His Word would not harden their hearts. It was because they didn’t want to hear His Word. By using parables, The Lord was revealing His patience and mercy. But at the same time, He revealed spiritual conditions. These parables were the words of a Master Teacher. Jesus told these parables, not to conceal the truth, but to reveal it.

At least one third of Christ’s recorded teachings is found in parables. To ignore these stories is to rob ourselves of much that He wants us to learn. Parables are part of the Word of God and we have been commanded to live on every word.

But he answered and said, It is written, Man shall not live by bread alone, but by every word that proceedeth out of the mouth of God.

Jesus was being tempted by the devil and these are Jesus’ words. The disciples were privileged to understand hidden truths and therefore they had a great responsibility to put these truths into practice.

But he that knew not, and did commit things worthy of stripes, shall be beaten with few stripes. For unto whomsoever much is given, of him shall be much required: and to whom men have committed much, of him they will ask the more.

Being born again, not of corruptible seed, but of incorruptible, by the word of God, which liveth and abideth for ever.

If you want to grow a living plant, you must begin with a living seed. Like a seed, God’s Word may seem small and insignificant, but it is powerful. Have you ever seen a sidewalk cracked and broken because of a seed? When the Bible is placed next to learned books or the world, the Bible may not look any different but it is powerful, living and active.

For the word of God is quick, and powerful, and sharper than any twoedged sword, piercing even to the dividing asunder of soul and spirit, and of the joints and marrow, and is a discerner of the thoughts and intents of the heart.

Like a seed, God’s Word produces fruit and that fruit has in it the seed for more fruit. Tremendous potential lies in a seed. When the Word of God gets into a human heart and germinates and grows spiritual fruit it is eventually seen in that life but The Word like seeds must be planted to do any good. It must be cultivated, nurtured and protected.

Nineteen times in Matthew 13, James used the word ‘hear’. He was talking about listening with the inner ear and receiving God’s Word deep into the heart. Anyone who shares God’s Word today is a sower. Seed may be a pastor’s sermon, a simple witness to a friend, a sentence in a letter or a song, but if it contains the Word, it is seed being sown.

A sower must have personal concerns. He must wash the seed with his tears if he expects to see a harvest.

5They that sow in tears shall reap in joy. 6He that goeth forth and weepeth, bearing precious seed, shall doubtless come again with rejoicing, bringing his sheaves with him.

I have planted, Apollos watered; but God gave the increase.

A principal or partnership must operate if there is to be a harvest. There must be no competition in the harvest. We are God’s fellow workers.

35Say not ye, There are yet four months, and then cometh harvest? behold, I say unto you, Lift up your eyes, and look on the fields; for they are white already to harvest. 36And he that reapeth receiveth wages, and gathereth fruit unto life eternal: that both he that soweth and he that reapeth may rejoice together. 37And herein is that saying true, One soweth, and another reapeth. 38I sent you to reap that whereon ye bestowed no labour: other men laboured, and ye are entered into their labours.

Since God’s word is seed and our hearts are compared to soil our hearts can respond to God’s Word. Jesus explains that there are four kinds of hearts in the world and He identifies them according to the way they respond to the seed of God’s word.

The hard heart. There were lots of little foot paths that ran through the fields in Palestine so it would not be unusual for some of the seed to fall on hard soil.

But he that received the seed into stony places, the same is he that heareth the word, and anon with joy receiveth it;

Such soil represents the person who does not understand the Word of God. He hears, but does not comprehend so the seed lies on the surface of the soil and never sinks in. Satan sees the see and like a bird, swoops down and snatches it away. The fault did not lie with the seed, but the soil.

The shallow heart. The soil in Palestine lies on a thick layer of a limestone. When the soil is thin, the hearts of a germinating seed cannot go very far. As a result, the shoot springs up quickly, but there is no root system to sustain the plant.

Yet hath he not root in himself, but dureth for a while: for when tribulation or persecution ariseth because of the word, by and by he is offended.

No roots mean no water, so when the sun comes up, the shoot is scorched and dies. This represents an emotional hearer who hears the Word but doesn’t really receive it in his heart. His experience was shallow for it was on the surface. Sun is good for a plant, but in this case it destroys the plant.

Just as the sun helps the plant to draw up water and nourishment from the soil, so suffering and persecution helps the true believer trust The Lord and draw on His great resources. There must be roots.

The crowded heart. The soil described in Verse 22 does not clean, it had in it seeds for noxious plants, the sower could not see these foreign seeds but they were there. Weeds grow naturally. No farmer has to plant weeds. They come up whether we want them or not. The weeds represent those influencers from the world that choke the seed and keep it from bearing fruit.

He also that received seed among the thorns is he that heareth the word; and the care of this world, and the deceitfulness of riches, choke the word, and he becometh unfruitful.

He received the Word but when the seeds germinated, the cares of life and the deceitfulness of riches crowded out God’s message. The thorns in this section of the parable represent that which is sinful. The heart did not produce thorns until sin entered the world.

17And unto Adam he said, Because thou hast hearkened unto the voice of thy wife, and hast eaten of the tree, of which I commanded thee, saying, Thou shalt not eat of it: cursed is the ground for thy sake; in sorrow shalt thou eat of it all the days of thy life; 18Thorns also and thistles shall it bring forth to thee; and thou shalt eat the herb of the field; 19In the sweat of thy face shalt thou eat bread, till thou return unto the ground; for out of it wast thou taken: for dust thou art, and unto dust shalt thou return.

The faithful heart – Verse 23. The fact that Jesus called the heart, good ground, does not mean He was saying people basically have good hearts. The heart of man is basically sinful and apart from the working of God’s grace, it could never receive God’s Word and produce fruit for God’s glory.

But he that received seed into the good ground is he that heareth the word, and understandeth it; which also beareth fruit, and bringeth forth, some an hundredfold, some sixty, some thirty.

The fruitful heart receives the Word, holds fast to what it receives and produces fruit. But unless we cultivate the soil in our own hearts by spending much time in praying and reading His Word, the soil of our hearts will become shallow and crowded.