A Foe From The Beginning 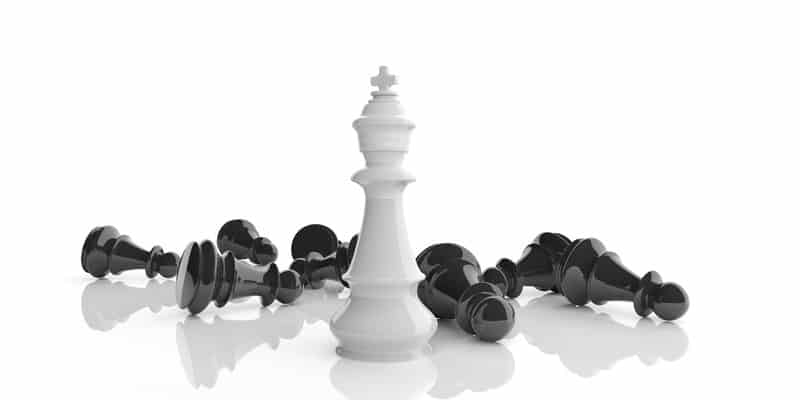 A Foe From The Beginning

Matthew 4:1-11 (Jesus speaking in verses 4, 7, 10)
1Then was Jesus led up of the Spirit into the wilderness to be tempted of the devil. 2And when he had fasted forty days and forty nights, he was afterward an hungred. 3And when the tempter came to him, he said, If thou be the Son of God, command that these stones be made bread. 4But he answered and said, It is written, Man shall not live by bread alone, but by every word that proceedeth out of the mouth of God. 5Then the devil taketh him up into the holy city, and setteth him on a pinnacle of the temple. 6And saith unto him, If thou be the Son of God, cast thyself down: for it is written, He shall give his angels charge concerning thee: and in their hands they shall bear thee up, lest at any time thou dash thy foot against a stone. 7Jesus said unto him, It is written again, Thou shalt not tempt the Lord thy God. 8Again, the devil taketh him up into an exceeding high mountain and sheweth him all the kingdoms of the world, and the glory of them; 9And saith unto him, All these things will I give thee, if thou wilt fall down and worship me. 10Then saith Jesus unto him, Get thee hence, Satan: for it is written, Thou shalt worship the Lord thy God, and him only shalt thou serve. 11Then the devil leaveth him, and, behold, angels came and ministered unto him.

Luke 10:17-20 (Jesus speaking in verses 18-20)
17And the seventy returned again with joy, saying, Lord, even the devils are subject unto us through thy name. 18And he said unto them, I beheld Satan as lightning fall from heaven. 19Behold, I give unto you power to tread on serpents and scorpions, and over all the power of the enemy: and nothing shall by any means hurt you. 20Notwithstanding in this rejoice not, that the spirits are subject unto you; but rather rejoice, because your names are written in heaven.

1 Peter 5:8
Be sober, be vigilant; because your adversary the devil, as a roaring lion, walketh about, seeking whom he may devour:

Neither of these views can be supported from Scripture. The Bible depicts Satan as a powerful being, yet, he is not all powerful nor present everywhere and he has already been defeated by Christ.

If we try to confront him in our own power, he is indeed dangerous to us; however, Satan has no more power over us than we choose to give him. When we resist the devil by the authority Christ has given us, we will be victorious.

In the drama of redemption, the devil has been the persistent foe of God from the beginning. To understand the distressing conditions in the world and to meet the adversary’s attacks victoriously, it is important to know what the Bible says about this enemy of God and God’s people.

The Bible characterizes the arch-enemy of God in many ways:

Ye are of your father the devil…
John 8:44 (Jesus speaking)

John 8:44 (Jesus speaking)
Ye are of your father the devil and the lusts of your father ye will do. He was a murderer from the beginning, and abode not in the truth, because there is no truth in him. When he speaketh a lie, he speaketh of his own: for he is a liar and the father of it.

Hereafter I will not talk much with you: for the prince of this world cometh and hath nothing in me.
John 14:30 (Jesus speaking)

…the god of this world
2 Corinthians 4:4

2 Corinthians 4:4
In whom the god of this world hath blinded the minds of them which believe not, lest the light of the glorious gospel of Christ, who is the image of God, should shine unto them.

…the prince of the power of the air
Ephesians 2:2

Ephesians 2:2
Wherein in time past ye walked according to the course of this world, according to the prince of the power of the air, the spirit that now worketh in the children of disobedience:

…your adversary the devil
1 Peter 5:8

1 Peter 5:8
Be sober, be vigilant; because your adversary the devil, as a roaring lion, walketh about, seeking whom he may devour.

…the dragon, that old serpent, which is the Devil, and Satan
Revelation 20:2

Revelation 20:2
And he laid hold on the dragon, that old serpent, which is the Devil, and Satan, and bound him a thousand years.

Here are two passages of Scripture to suggest the original nature of Satan and to portray his fall from Heaven.

First passage: Isaiah 14:12-15 (The LORD speaking)
12How art thou fallen from heaven, O Lucifer, son of the morning! how art thou cut down to the ground, which didst weaken the nations! 13For thou hast said in thine heart, I will ascend into heaven, I will exalt my throne above the stars of God: I will sit also upon the mount of the congregation, in the sides of the north: 14I will ascend above the heights of the clouds; I will be like the most High. 15Yet thou shalt be brought down to hell, to the sides of the pit.

This passage describes the attitude of Lucifer, the five occurrences of the words “I will” in verses 13-14:

He lifted up his heart in self-will against God and was punished for his rebellion.

Second passage to suggest the original nature of Satan and to portray his fall from Heaven:

Ezekiel 28:11-17 (The LORD speaking)
11Moreover the word of the LORD came unto me, saying, 12Son of man, take up a lamentation upon the king of Tyrus, and say unto him, Thus saith the Lord GOD; Thou sealest up the sum, full of wisdom, and perfect in beauty. 13Thou hast been in Eden the garden of God; every precious stone was thy covering, the sardius, topaz, and the diamond, the beryl, the onyx, and the jasper, the sapphire, the emerald, and the carbuncle, and gold: the workmanship of thy tabrets and thy pipes was prepared in thee in the day that thou wast created. 14Thou art the anointed cherub that covereth; and I have set thee so: thou wast upon the holy mountain of God; thou hast walked up and down in the midst of the stones of fire. 15Thou wast perfect in thy ways from the day that thou wast created, till iniquity was found in thee. 16By the multitude of thy merchandise they have filled the midst of thee with violence, and thou hast sinned: therefore I will cast thee as profane out of the mountain of God: and I will destroy thee, O covering cherub, from the midst of the stones of fire. 17Thine heart was lifted up because of thy beauty, thou haste corrupted thy wisdom by reason of thy brightness: I will cast thee to the ground, I will lay thee before kings, that they may behold thee.

Because of his pride he was debased from his original position. As the prince and god of this age he is extremely busy opposing the purposes of God.

We all know that Jesus Christ is divine, but in order for Him to redeem us from sin, it was necessary that He become human. Although He was a perfect and sinless human, He suffered death on behalf of sinful mankind who deserved death.

The story in Matthew 4 (Scripture above), the temptation of Jesus in the desert, underscores His humanity. After He was baptized by John and before He began His earthly ministry, Jesus was led up of the Spirit into the wilderness to be tempted of the devil. Jesus fasted 40 days. He was challenged by Satan in the form of three temptations.

The only way that Jesus Christ could redeem us was by taking the difficult way of the cross.

Satan made these three attempts to turn Jesus aside from doing the will of God. In his challenges Satan admitted that Jesus is the Son of God. He even quoted Scripture to try to persuade Jesus to prove His Deity before the appointed time.

Satan tempted Christ to perform a miracle for His own comfort, by turning stones into bread. There are many rocks and stones in Jerusalem. Maybe the devil knew that these flat stones would remind Jesus of His mother’s barley and wheat cake that she had made for Him.

Jesus was always ready with a quotation from the Word of God. He used it for comfort, for exhortation and for rebuke. On occasion He used it to overcome the temptations of the devil.

Jesus responded to the devil’s challenge by saying, Man shall not live by bread alone, but by every word that proceedeth out of the mouth of God. (Matthew 4:4) Jesus always tried to turn men’s minds from lower to higher desires, from “barley bread” to “living bread.”

Then the devil took Jesus into the Holy City and set Jesus on the pinnacle of the Temple. The devil used the Word again.

Matthew 4:6
And saith unto him, If thou be the Son of God, cast thyself down: for it is written, He shall give his angels charge concerning thee: and in their hands they shall bear thee up, lest at any time thou dash thy foot against a stone.

The devil had taken his cue from Jesus and started quoting Scripture too, but he distorted it and used it out of context and he omitted the last half of the content of the first verse to keep thee in all thy ways.

Psalm 91:11
For he shall give his angels charge over thee, to keep thee in all thy ways.

Jesus responded to the devil by quoting from

Deuteronomy 6:16
Ye shall not tempt the LORD your God…

This verse in Deuteronomy 6:16 refers to the incident in Numbers 20:7-1 when Moses claimed credit for getting water from the rock and consequently fell into the sin of pride.

Matthew 4:7 (refers to the temptation by the devil)
Jesus said unto him, It is written again, Thou shalt not tempt the Lord thy God.

Third passage to suggest the original nature of Satan and to portray his fall from Heaven:

The most deadly of Satan’s “ifs” is in the third temptation. He offered Jesus the empires of the world. Now the kingdoms of the world were not his to give, but we may also regard as “worldly kingdoms”