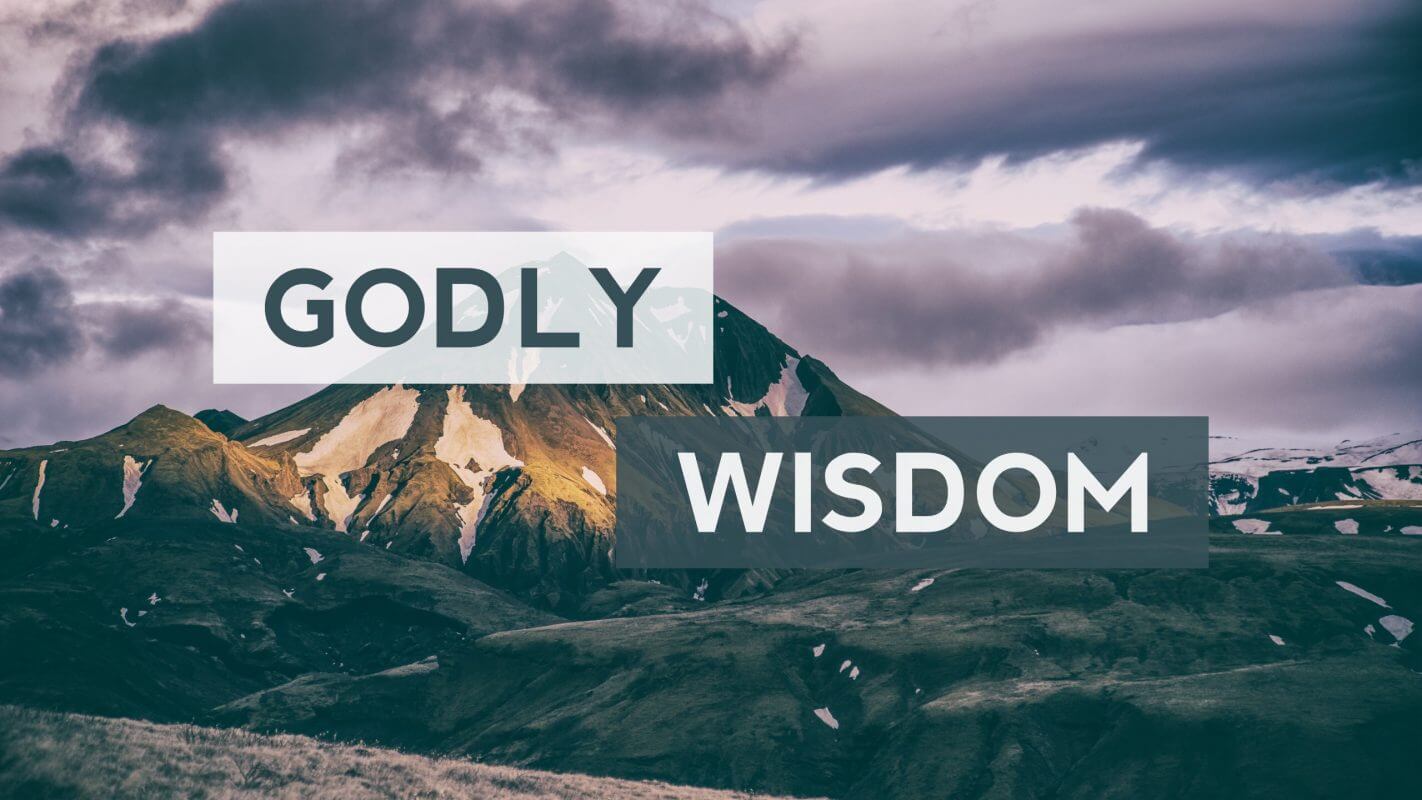 We usually think of wisdom as something we have in our heads, that wisdom is intellectual, something in our mind. We also know that wisdom is not worth much unless we can put it into practice, so the purpose in gaining wisdom is not just to have it, but to use it in practical ways in daily living.

About 3,400 years ago, the prophet Moses reflecting on the brevity of life and prayed, “Lord, teach us to number our days that we may apply our hearts to wisdom.” Since life can be lived only one day at a time, how we live each day is important. Life has its ups and downs, memorable events and crisis experiences, but for the most part is made up of what we call daily living.

Life is short and it passes swiftly so we need wisdom to know how to live each day in the best way and that is called godly living. This lesson calls attention to some of the wise attitudes and behaviors necessary for godly living. Both wisdom and knowledge began with the fear of the Lord.

The fear mentioned here is the reverent and respectful attitude one has toward God. Knowledge and wisdom need each other and work together. Wisdom is the right use of knowledge, but wisdom cannot operate without the knowledge that comes from a reverent attitude toward God and a right relationship with God.

God is the source of truthfulness and honesty. Accurate weights and measures are the LORD’s. Honesty is not just a good policy or just a human ideal. Honesty is part of the very character of God and He commands that we be honest. The honesty of God is the aspect of His holiness. Honesty should be a trait of every believer in Christ.

A wicked man taketh a gift out of the bosom to pervert the ways of judgment.

This proverb sets before us one of the worst kinds of dishonesty. The judge or an official of government who accepts a bribe to keep justice from being done is not only dishonest, but wicked: a dangerous position to be in.

The thought of gaining something for oneself is usually the motive behind dishonesty. God calls us to be holy vessels. Virtues of honor, truth and honesty are basic traits in those who walk with God. We can have these virtues in our lives through grace and power of the Holy Spirit.

13Who is a wise man and endued with knowledge among you? let him shew out of a good conversation his works with meekness of wisdom. 14But if ye have bitter envying and strife in your hearts, glory not, and lie not against the truth. 15This wisdom descendeth not from above, but is earthly, sensual, devilish. 16For where envying and strife is, there is confusion and every evil work. 17But the wisdom that is from above is first pure, then peaceable, gentle, and easy to be intreated, full of mercy and good fruits, without partiality, and without hypocrisy. 18And the fruit of righteousness is sown in peace of them that make peace.

In other words, those who are peacemakers will plant seeds of peace and reap a harvest of goodness.

God made people to work. Even before the fall, God placed man in the Garden of Eden “… to dress it and to keep it,” Genesis 2:15. When God instituted the Sabbath, a weekly day of rest, He made it clear it was to be precluded by six days of work.

23In all labour there is profit: but the talk of the lips tendeth only to penury.

The crown of the wise is their riches: but the foolishness of fools is folly.

This gives us one of the purposes of work, to keep us from poverty. To have the necessities of life, we must work. To be idle only leads to poverty and misery. Verse 24, above, teaches that wisdom has its own rewards, although the rewards of being wise are not always the accumulation of riches. The wise will still have much to show as evidence of their wisdom. The one who spurns God’s wisdom has nothing but his folly to show for it.

Our Heavenly Father is always working for the good of His creatures and no being whoever trod this earth labored so continuously and earnestly as did the Son of God. During His public ministry the completion of one work was the beginning of another. He was ever about His Father’s business, diligently carrying on and seeking to finish the work which the Father had given Him to do. The labors that are diligently achieved bring about much recognition.

Billy Graham, D. L. Moody and other diligent workers for the Kingdom have stood before presidents and kings as representatives of the great God of the Universe. It has not been slothfulness, but diligence, that made these individuals such valuable advisers to world leaders. Honesty and honorable living bring God’s blessings.

The benefits of pleasing the Lord are more numerous than we can imagine. Likewise, the results of displeasing God are more damaging than we want to experience, loss of life being the most serious.

Wealth gotten by vanity shall be diminished: but he that gathereth by labour shall increase.

We are not lacking in examples of people who have gained their wealth dishonestly and then lost it. Those who sow seeds of dishonesty will reap more than they have sown. On the other hand, the person who labors honestly will find his resources increasing as well. He may not become rich, but he will have a clear conscious.

Bread of deceit is sweet to a man; but afterwards his mouth shall be filled with gravel.

What is the bread of deceit? This phrase refers to anything that is gain by fraud or deceit, such as bribery. Such gain seems sweet at the time, but it does not last. Solomon described the effects of this deceit in an interesting way. What could be more unpleasant than having a “mouth full of gravel”?

Living by deceit is like standing on quicksand which will eventually pull the individual down and destroy him. Honesty is a commodity that is sorely lacking in today’s world. Some feel they need to be dishonest to succeed in the competitiveness of business, but the believer must not be caught up in this philosophy. God those who are honest and HE will take care of His children who follow His principles.

22Rob not the poor, because he is poor: neither oppress the afflicted in the gate: 23For the LORD will plead their cause, and spoil the soul of those that spoiled them.

Warn against exploiting the poor. Poor people are always vulnerable because they have little means of defending themselves. The man who fears God will not take advantage of anyone for his own gain. He will live by Jesus’ admonition to treat others as he wants to be treated.

Besides, the Lord will defend the poor against those who would take advantage of them. Verse 23 says, “For the Lord will plead their cause, and spoil the soul of those that spoiled them.”

24Make no friendship with an angry man; and with a furious man thou shalt not go: 25Lest thou learn his ways, and get a snare to thy soul.

Warn against the wrong kind of associations, particularly with those who are hot-tempered and easily angered. Unconsciously, we are influenced by those whose company we keep. Before we realize it, we will follow the ways of the angry. To avoid having his own spirit poisoned, the man with godly wisdom will distance himself from such associations.

26Be not thou one of them that strike hands, or of them that are sureties for debts. 27If thou hast nothing to pay, why should he take away thy bed from under thee?

Verses 26 and 27 give a strong denunciation of the practice of signing notes or making pledges for others. The term “strike hands” is equivalent to the practice of shaking hands as a gesture that an agreement has been reached.

These verses teach us financial integrity. Ours is a day of easy credit. We are well aware of many who have loaded themselves with credit card debt until the payments were more than they could afford. Others want to keep up with friends and neighbors and buy expensive items they cannot afford. This practice becomes a spiritual hindrance as well as a financial problem. Those verses teach us not to incur financial obligations for which we do not have the resources to pay.

The matter of signing notes and sureties for others is a very serious matter, for it might mean you will be sleeping on the floor while the other person sleeps in your bed. Sometimes well-meaning people have signed notes to help others for whom they felt sorry. Often this leads to disrupted friendship and sometimes disaster for the cosigner. He could lose everything he has.

Better is the poor that walketh in his uprightness, than he that is perverse in his ways, though he be rich.

Better to be poor and honest than to be rich and be a cheater.

1I beseech you therefore, brethren, by the mercies of God, that ye present your bodies a living sacrifice, holy, acceptable unto God, which is your reasonable service. 2And be not conformed to this world: but be ye transformed by the renewing of your mind, that ye may prove what is that good, and acceptable, and perfect, will of God.