A Mother of Nations 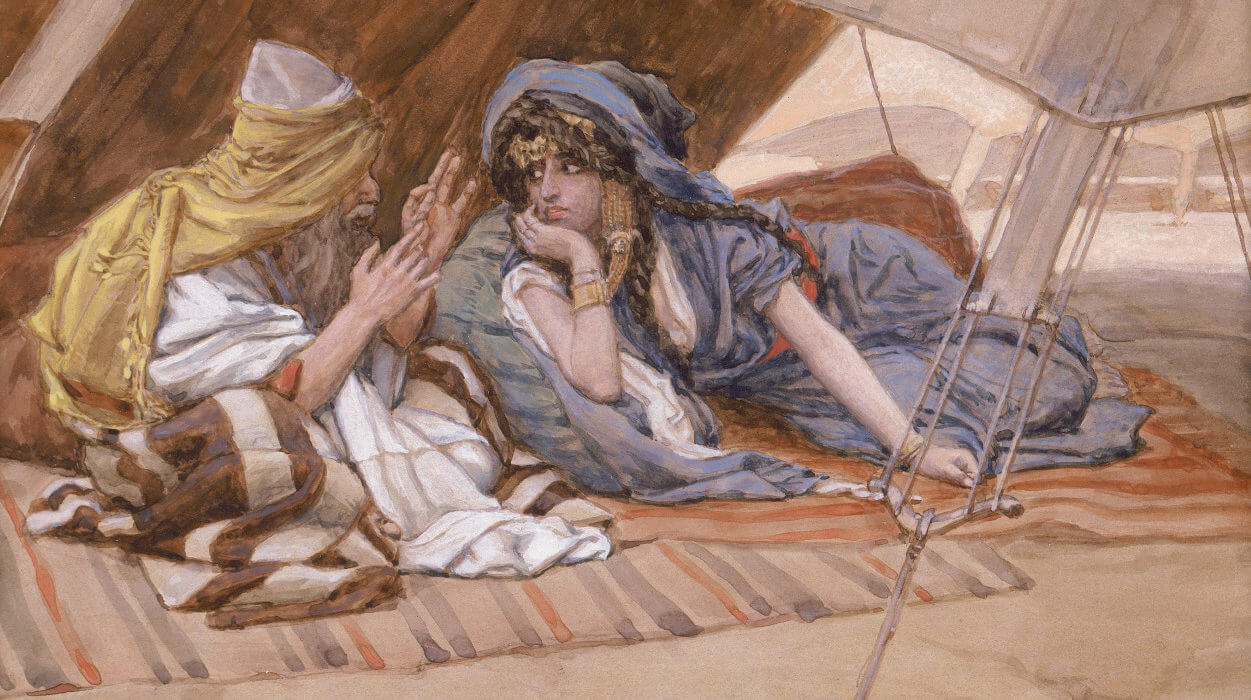 A Mother of Nations

1And the LORD appeared unto him in the plains of Mamre: and he sat in the tent door in the heat of the day; 2And he lift up his eyes and looked, and, lo, three men stood by him: and when he saw them, he ran to meet them from the tent door, and bowed himself toward the ground,

9And they said unto him, Where is Sarah thy wife? And he said, Behold, in the tent. 10And he said, I will certainly return unto thee according to the time of life; and, lo, Sarah thy wife shall have a son. And Sarah heard it in the tent door, which was behind him. 11Now Abraham and Sarah were old and well stricken in age; and it ceased to be with Sarah after the manner of women. 12Therefore Sarah laughed within herself, saying, After I am waxed old shall I have pleasure, my lord being old also?

14Is any thing too hard for the LORD? At the time appointed I will return unto thee, according to the time of life, and Sarah shall have a son.

1And the LORD visited Sarah as he had said, and the LORD did unto Sarah as he had spoken. 2For Sarah conceived, and bare Abraham a son in his old age, at the set time of which God had spoken to him. 3And Abraham called the name of his son that was born unto him, whom Sarah bare to him, Isaac. 4And Abraham circumcised his son Isaac being eight days old, as God had commanded him. 5And Abraham was an hundred years old, when his son Isaac was born unto him. 6And Sarah said, God hath made me to laugh, so that all that hear will laugh with me. 7And she said, Who would have said unto Abraham, that Sarah should have given children suck? for I have born him a son in his old age. 8And the child grew, and was weaned: and Abraham made a great feast the same day that Isaac was weaned.

We’re studying this week about the life of a man who was successful in many areas of his life. He accumulated a lot of wealth. He was a good family member, willing to put his life on the line in order to save his nephew, Lot. He had enough servants to form a small army.

Material wealth represented only a part of this man’s accomplishments. He enjoyed the privilege of personal visits by God. Such was Abram’s devotion to God that he turned down offers of riches from royalty he had helped. One thing was missing, however, one thing that would make his life complete. The man was childless. He remained so in spite of God’s promises that he would become a great nation.

Even though Sarah was beyond child-bearing years, they waited for 25 years before God fulfilled His word. Sarah’s laughter at the promise of her impending pregnancy is echoed by our own doubts when we are faced with the seemingly impossible. This episode shows how God makes a promise and then keeps His promise despite our struggles with faith. Nothing is too hard for God.

He accomplishes His plan despite our weaknesses. He will keep all His promises regardless of any barrier to His will that might exist.

1After these things the word of the LORD came unto Abram in a vision, saying, Fear not, Abram: I am thy shield, and thy exceeding great reward. 2And Abram said, Lord GOD, what wilt thou give me, seeing I go childless, and the steward of my house is this Eliezer of Damascus?

God stated two things about Himself. First, He was Abram’s shield. This had already been proven in battle. What do you see in your mind’s eye when you think of a shield? …something that a person holds to ward off the most dangerous blows. Change that image to the Lord Himself being our Protector.

Second, The Lord was Abram’s exceeding great reward. God would do more than simply protect Abram. He would enrich his life and meet his soul’s deepest needs. Taking God at His word, he made a request that revealed the source of his fear. The problem was very simple. God had promised possession of the lands to Abram’s descendants, yet he had no children! Abram said in Genesis 15:3, Behold, to me thou hast given no seed. . .

Abram was simply stating a fact but he also recognized that giving of children is in God’s domain. The time of their birth is a matter of His planning. Every child is a gift, given by God.

A valuable lesson can be learned from this encounter. We should not be afraid or embarrassed to voice our deepest fears and longings to the Lord. Aside from the obvious fact that He knows them anyway, the Lord must take delight in the times when we choose to lean on Him.

Sometime later God appeared to Abraham (at this time his name had been changed) and again, made the promise, this time specifying the birth of a son and multiplying of descendants as the stars in the sky.

1After these things the word of the LORD came unto Abram in a vision, saying, Fear not, Abram: I am thy shield, and thy exceeding great reward. 2And Abram said, Lord GOD, what wilt thou give me, seeing I go childless, and the steward of my house is this Eliezer of Damascus? 3And Abram said, Behold, to me thou hast given no seed: and, lo, one born in my house is mine heir. 4And, behold, the word of the LORD came unto him, saying, This shall not be thine heir; but he that shall come forth out of thine own bowels shall be thine heir. 5And he brought him forth abroad, and said, Look now toward heaven, and tell the stars, if thou be able to number them: and he said unto him, So shall thy seed be.

In order for a nation to come from the aging Abraham and Sarah, a miraculous birth was required, totally beyond human possibility. Sarah was 90 years old. Abraham was 99 years old when the Lord appeared to him, but not too old to have fellowship with God. Age may shut us out from the joy and companionships of youth but through grace, it may deepen our friendship with God. Abraham was 100 years old when Isaac was born. It was impossible for Sarah to have a child but it was not impossible for God to do a miracle. Sarah’s situation is a perfect example. In Verse 14, God asked,

. . .but with God all things are possible.

They named the boy Isaac as the Lord commanded. Isaac means ‘he laughed’ or ‘laughter.’ His name would remind Sarah of two laughters. First, it would remind of her doubting laughter and it would remind her of her joyful laughter when receiving God’s great blessing. The name Isaac would symbolize both her weakness and God’s power, her struggle to believe and God’s faithfulness.

God has proven Himself faithful again and again. He has never failed to keep His word. God can be trusted. He will not neglect any of His children. He faithfully nurtures and cares for each one individually fulfilling all His promises.

Not quite everyone joined in the rejoicing and celebration at Isaac’s birth. There was Hagar, the slave of Sarah’s who had born a son to Abraham. That son was a teenager now, and he and his mother resented the new baby who was replacing Ishmael. The matter came to a crisis when Isaac was weaned. Weaning marked the transition from babyhood to childhood and it was the occasion for a happy feast. The envious teen marred the feast with mocking and Sarah caught him and she demanded that Hagar and her son be sent away.

Once Hagar saw that she would bear a son to Abraham, she became proud. Do you see the parallel between Hagar’s attitude and pride in the believer? In spite of our unworthiness, God has chosen us to do His work. How many times are we guilty of thinking that we do that work in our own strength?

Hagar’s attitude resulted in a great deal of personal suffering because she was forced to endure the wrath of her mistress.

5And Sarai said unto Abram, My wrong be upon thee: I have given my maid into thy bosom; and when she saw that she had conceived, I was despised in her eyes: the LORD judge between me and thee. 6But Abram said unto Sarai, Behold, thy maid is in thy hand; do to her as it pleaseth thee. And when Sarai dealt hardly with her, she fled from her face.

How much suffering does pride cause in our lives?

God told Abraham that Isaac would be the heir, but God also addressed Abraham’s concerns for Ishmael.

20And as for Ishmael, I have heard thee: Behold, I have blessed him, and will make him fruitful, and will multiply him exceedingly; twelve princes shall he beget, and I will make him a great nation. 21But my covenant will I establish with Isaac, which Sarah shall bear unto thee at this set time in the next year.

As we witness the present strife between the descendants of Isaac (Jews) and Ishmael (Arabs), we cannot help wondering whether a great deal of suffering would have been avoided if Abraham and Sarah had not devised their own plan.

The choices we make do affect our descendants.

God’s purposes are not achieved through ungodly means. It will do us good to wait upon the Lord and trust Him to meet all our needs according to His perfect plan.