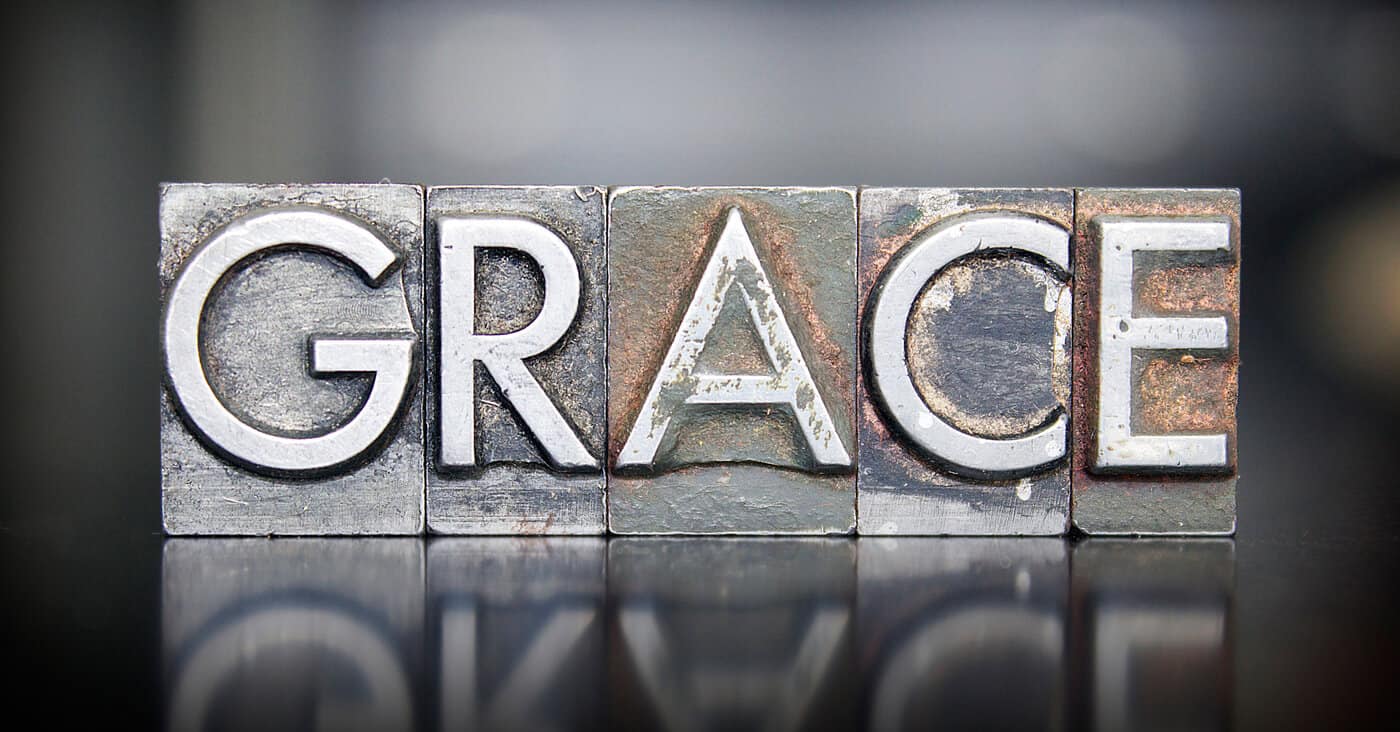 For the law was given by Moses, but grace and truth came by Jesus Christ.

12Wherefore, as by one man sin entered into the world, and death by sin; and so death passed upon all men, for that all have sinned: 13(For until the law sin was in the world: but sin is not imputed when there is no law.14Nevertheless death reigned from Adam to Moses, even over them that had not sinned after the similitude of Adam’s transgression, who is the figure of Him that was to come. 15But not as the offence, so also is the free gift. For if through the offence of one many be dead, much more the grace of God, and the gift by grace, which is by one Man, Jesus Christ, hath abounded unto many. 16And not as it was by one that sinned, so is the gift: for the judgment was by one to condemnation, but the free gift is of many offences unto justification.17For if by one man’s offence death reigned by one; much more they which receive abundance of grace and of the gift of righteousness shall reign in life by One, Jesus Christ.)   18Therefore as by the offence of one judgment came upon all men to condemnation; even so by the righteousness of One the free gift came upon all men unto justification of life.19For as by one man’s disobedience many were made sinners, so by the obedience of One shall many be made righteous. 20Moreover the law entered, that the offence might abound. But where sin abounded, grace did much more abound: 21That as sin hath reigned unto death, even so might grace reign through righteousness unto eternal life by Jesus Christ our Lord.

1And you hath he quickened, who were dead in trespasses and sins; 2Wherein in time past ye walked according to the course of this world, according to the prince of the power of the air, the spirit that now worketh in the children of disobedience: 3Among whom also we all had our conversation in times past in the lusts of our flesh, fulfilling the desires of the flesh and of the mind; and were by nature the children of wrath, even as others. 4But God, who is rich in mercy, for His great love wherewith He loved us, 5Even when we were dead in sins, hath quickened us together with Christ, (by grace ye are saved;) 6And hath raised us up together, and made us sit together in heavenly places in Christ Jesus: 7That in the ages to come He might shew the exceeding riches of His grace in His kindness toward us through Christ Jesus. 8For by grace are ye saved through faith; and that not of yourselves: it is the gift of God:  9Not of works, lest any man should boast. 10For we are His workmanship, created in Christ Jesus unto good works, which God hath before ordained that we should walk in them.

17Ye therefore, beloved, seeing ye know these things before, beware lest ye also, being led away with the error of the wicked, fall from your own stedfastness. 18But grow in grace, and in the knowledge of our Lord and Saviour Jesus Christ. To him be glory both now and for ever. Amen.

This lesson describes the wonder of God’s grace.  Grace is defined as the unmerited favor God freely bestows on the lost, the unredeemed.  It comes from the abundance of His mercy and goodness.

The text chosen demonstrates that the work of grace produces salvation and joy for all who receive Christ as Lord.  It is an irreplaceable work in that nothing can serve as a substitute for it.  Grace and grace alone make salvation possible.  Neither human goodness nor human effort can bring deliverance from sin.  It comes only as the result of the gift of God’s grace.

We enjoy a marvelous dose of God’s grace at salvation.  Our sins are forgiven, and we are able to commune with a perfect, holy God in spite of our moral limitations.  God’s grace also continues to operate in us after salvation, molding us into the servants He can use to carry out His will.  Jesus came into the world fully human and fully God.  Thus, He related God’s grace to man directly, allowing John to declare that we have received of that fulness.

God has grace so abundant that He dispenses “grace for grace.”  It just keeps coming to man day after day.  What a wonder that is, Jeremiah observed in:

22It is of the LORD’S mercies that we are not consumed, because His compassions fail not. 23They are new every morning: great is thy faithfulness.

Every day the Christian can appreciate new expressions of God’s grace, His freely given love and mercy.

Paul described man’s inability to satisfy the moral requirements of a Holy Good.

For all have sinned, and come short of the glory of God

God’s holiness is so pronounced that the Seraphim exclaimed “Holy, holy, holy, is the LORD of hosts.”

And one cried unto another, and said, Holy, holy, holy, is the LORD of hosts: the whole earth is full of His glory.

As such, He is separate and distinct from any of His creatures.  Fallen men can never bridge the gap between himself and God.  Man’s acceptance of Jesus as the embodiment of God’s grace is the only answer to fulfilling the requirements of God’s law.  Grace is a vital part of Christian belief.  It covers the origin, continuance and future of the Christian life.  Without grace, men would be eternally lost with no hope of deliverance.

God’s grace is unique.  It is given despite the absence of anything that would prompt it.  There is no desirability in the sinner that would cause God to want to extend grace to him.  The grace God gives comes not in response to suitability of the recipient but in spite of lack of merit or admirable qualities.

God brings His grace to an undeserving life and joy is planted in that life.  The Law was a set of guidelines and principles communicated through Moses.  By comparison, the very basis for the Law and the fulfillment of the Law came through Christ.  Grace was the initiative from which God reached out in love to His people.

Grace describes the initiative and desire of God to reach out to lost humanity.  His grace also continues to reveal His truth as individuals follow Him.

In Ephesians 2:1 and 2, above, Paul addressed the Gentile Christian when he said “you.” Now he shifts to “we,” including himself and other Jewish Christians “all of us,” he said, “were children of disobedience at one time.

Flesh and mind are both battlegrounds in spiritual warfare.  Desires of the flesh lead to gross sins of violence and passion.  Desires of the mind lead to subtler, but not less deadly, sins of malice and envy and pride.

Jew and Gentile alike were by nature the children of wrath.  Verses 4 and 5, above, say, 4But God, who is rich in mercy, for His great love wherewith He loved us; 5Even when we were dead in sins, hath quickened us together with Christ,. . .

But God. . .Those words provide a theme running through Scripture.  They flash the contrast of God’s new day against the blackness of this world’s night.  Without God, the night is eternal.

Thank God His rich mercy and great love can bring complete change to the darkest life.  The Ephesians had experienced this change.

Verses 6 and 7, above, describe both a present and future glory for the believer.  Christ has ascended to sit at the Father’s right hand.  Through Him we can enter into God’s presence with any need and in this manner sit with Jesus in Heavenly places.  The Father planned it all as a free gift, an expression of His grace and kindness toward mankind.

Salvation is by grace and is received through faith, but one does not boast of possessing the faith it takes to be saved.  Not even that is of himself.  It, too, is the gift of God.  See Ephesians 2:8, above.  The Spirit who convicted of sin also assists with the requirements for salvation.  Grace extends salvation to mankind when belief is coupled with repentance.

Works cannot save.  In shaping a new creation through new birth, the Lord does intend that His people live a holy life.  As Ephesians 2:10 explains, once Christ has transformed a life, that person is to demonstrate works of righteousness.  These deeds must be present as evidence of God’s upright and loving nature indwelling the believer.

God’s grace works in conjunction with His many other attributes to make His salvation known.  He manifests His power through nature, so much so that Paul declared that men know enough of God through nature that they are without excuse.

This does not mean, however, that a person does not need to accept Christ to go to Heaven.  Repentance and acceptance of Christ as Savior are still requirements for salvation.  The Bible is an infallible record of Christ’s coming.  This makes Scripture another means to communicate Christ as the only means of grace for salvation.

To keep from falling, they needed to grow in grace.  Some characteristics of this growth can be found in the beginning of the letter.  Peter had instructed them to strengthen their saving faith by adding to it goodness, knowledge, self-control, perseverance, godliness, brotherly kindness and charity.  Also, Peter promised that if you possess these qualities in increasing measure, they keep you from being ineffective and unproductive.

By ensuring that each believer was growing and progressing in these godly attributes, they could be sure that they were growing in grace.  Once we are saved, we must also be prepared to defend ourselves against the challenges to our faith that Satan will bring our way.

Just as Peter warned the believer of his day, we must also be on guard against false teachings.  Some of those teachings only deviate subtly from the truth and can gradually lead us into more serious error.  We can also encourage others when their faith is challenged.  The Body of Christ is the support system that can help each believer mature spiritually.

Thank You, Jesus Christ, for grace and truth You brought to the believer!